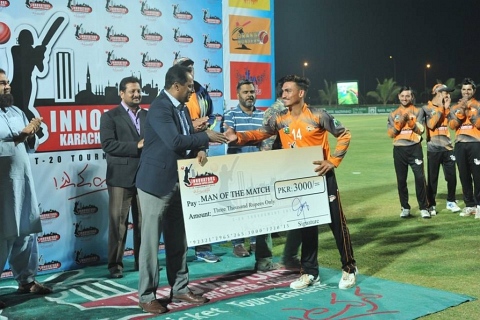 After winning the toss hunters decided to bat first. Opening batsmen started baton charging against the Saddar bowlers and put 69 runs in first four overs. Hunters were 125/1 in 8 overs and Rehan Tanoli was unbeaten on 85 runs. Tanoli got out on 88 runs in just 30 balls with 11 boundaries and 6 sixes while Fawad scored a quick cameo of 44 runs in 24 balls 2 fours and 4 sixes. In allotted 20 overs, Hunters scored a massive 241 runs for the loss of 7 wickets.


Ahmer Shah remained the economical bowler from Saddar as he picked up 3 wickets for 24 runs in 4 overs. Yasir Aim got 2 while Araslan Hussain and Hanan Achakzai grabbed one wicket each.


In reply, Saddar Strikers were in deep deep trouble as they were 52/6 in the seventh over of the innings and all the team fall prey at 72 runs in 12.2 overs and Hunters hunts the strikers by buge margin of 169 runs. 6 Saddar batsmen were unable to open their account while 9 of them did not move into double figures. Opener Hanan Achakzai 27 and Aryan Ali 13 not out were main runs scorers from Saddar Strikers.


Adnan picket up 3 wickets while Fawad got two and Faisal, Arif took 1 wicket each from Orangi Hunters.