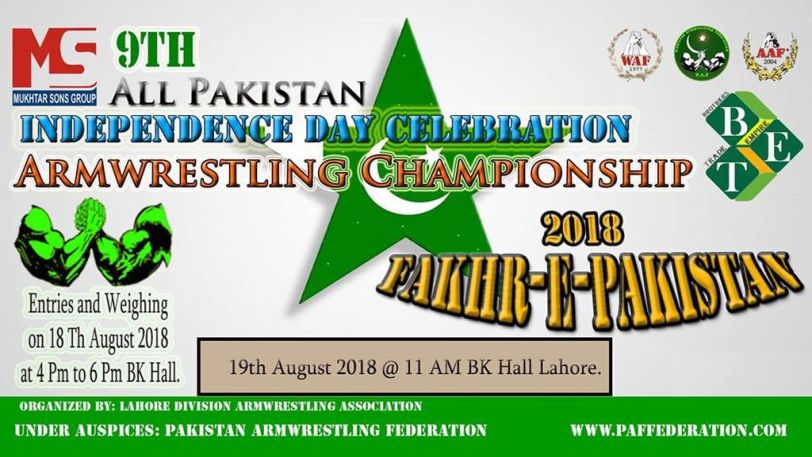 18 August, 2018 - 19 August, 2018
Lahore
BK Hall,Near PSO Petrol Pump Main Sanda Road Lahore.
Body Building
Lahore Division Arm wrestling Association is organizing the 9TH All Pakistan Independence Day Celebration Armwrestling Championship 2018 on 19 August under the supervision of Pakistan Armwrestling Federation at BK Hall,Near PSO Petrol Pump Main Sanda Road Lahore.
Arm wrestlers from all across country will participate in the championship. Gold winner of Senior & Master Division classes will compete for the title of “Fakhr-e-Pakistan 2018”.
The Former "Fakhr-e-Pakistan" title holders will not be able to participate in the "Title Fight Rounds" but they can compete their weight classes. Players participated in unofficial events of Arm wrestling will not be eligible to take part in official events.
The entries and weighing for the championship participates will be held on 18th August 2018 from 4:00pm to 6:00 pm at BK Hall, Lahore.
All Pakistan Independence Day Celebration Armwrestling Championship 2018 Schedule:
WEIGHT CLASSES:
PAF issued following set of Instructions for the championship:
1. Player who would not reach on weighing (04:00 PM to 06:00 PM 18th August 2018), his entry will be cancelled.
2. Only short sleeve or sleeveless shirts & sport pants (no jeans) allowed during competition.
3. Junior, Youth, Senior and Master divisions consisted on Single elimination system till Semi Final round.Semi Final knockout system, Only semi Final & Final rounds will be consisted in Double elimination system.
4. Gold Winner of Senior & Master Division classes will take Part in Title: Fakhr-e-Pakistan 2018.
5. Title Fight 1st round to Semi Final knockout system, only Final Title Fight round will be consisted in Best of 3).
6. After call, If competitors fail to come to the table in the 30 seconds allotted they will be given a loss. Their name will be dropped to its proper slot, the same as a loss in an actual bout. If they already have a loss they would drop out of the tournament.
7. The PAF will have the right to disallow entry to any player not meeting PAF requirements or which creates disorder.