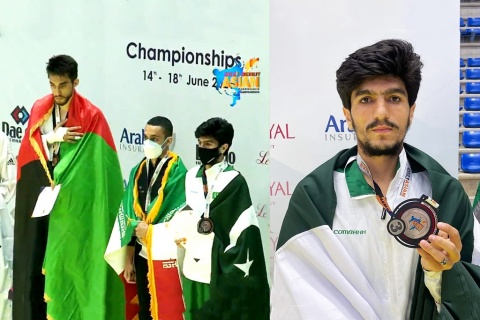 One of the top notch Taekwondo fighters from Quetta,  Haroon Khan showcased a splendid display of martial arts combat in the ongoing 24th Asian Khyrougi Taekwondo Championship by winning a bronze medal.

In the -58 kg category, Haroon sealed the pre-quarterfinal fight against Mongolia’s Enkhbayar Gantulga by the score of 36-30.

In the quarterfinal against Shohrukh Barotov of Tajikistan, Haroon started well, taking lead in the first round, but during the second round, an illegal attack by Shohrukh on Haroon’s nose fainted him. On a score of 27-18, he fell on the ground and the medical team took him to the Notre Dame University Hospital for treatment.

As hitting on the face is not allowed according to Taekwondo rules so the Referee and jury gave Haroon the victory and he advanced for the Semifinal.

Unfortunately, the doctors after examining the x-ray reports did not allow him to compete further in the championship. President PTF announces Rs One Lac for Haroon Khan for his outstanding performance and getting first ever Asian Medal in Asian Championship.