Top seed Hamza Shairf was on his metal to dispatch Ashab Irfan 3-1 and won the All Pakistan Under-19 Squash C'ship 2020 title at Qamar Zaman Squash Complex, Qayuum Stadium, Peshawar. 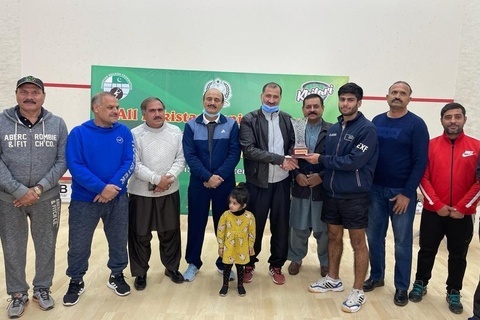 The final played between top seed Hamza Sharif and former Under-17 No.1 Ashab Irfan, who earlier defeated World no.217 Noor Zaman, where Asian no.13th in Under-19 category, Hamza Sharif was on his metal to dispatch Ashab Irfan 3-1.

Former Under-15 No.1 Ashab started well, displaying his explosive style of play to win the opening game 11-6, but Hamza remained patient and applied his game plan well to not trade blows and was rewarded with a high number of unforced errors from Ashab.

That tactic continued to work for Hamza as he pushed ahead in second and third game and took control of the match to comfortably win the final.

Former World Squash Champion Jansher Khan graced the closing ceremony as a chief guest and distributed trophies and Cash prizes among the winners.