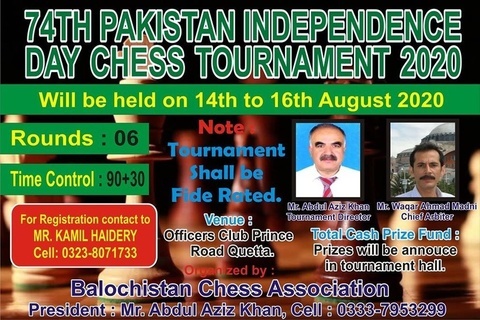 The associations are providing a chance for the chess talent existing in Pakistan to show their skills and talent in the upcoming Tournament which will be contested in Quetta. The competitions will begin on 14th of August at Officers Club Prince Road, Quetta.

The hopefuls need to get themselves registered through this phone number: Mr Kamil Haidery 0323-8071733

The registrations are free and are open till 14th of August.

The said championship would be played according to Fide rated system and there will be a total of 6 rounds with a time control of 90+30.

President of Balochistan Chess Association, Mr Abdul Aziz Khan will be tournament director and Mr Waqar Ahmad Madni will be Chief Arbiter of the event.

The cash prize will be announced in the tournament hall.