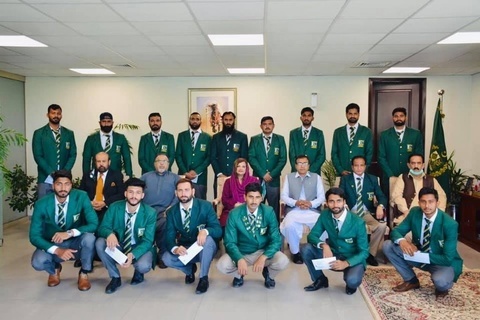 Due to the prevailing situation of Covid-19 and safety measures, awards were distributed in three different sessions. As per the approved cash award policy, each member of the team received Rs.500, 000/-. Rs. 7.500 million were awarded to the players.

Parliamentary Secretary appreciated the players for their untiring efforts especially beating INDIA in the final match to become champions of the South Asian Games. She added that the team not only made us proud but also to the whole nation and hoped that team will retain the title and bring laurels in other mega international events.

Secretary IPC Mr Muhammad Ali Shahzada while talking to the players informed that Dr.Fehmida Mirza Federal Minister for IPC/President PSB planned to arrange a graceful ceremony by inviting the Prime Minister as ‘Chief Guest’ aiming to connect the PM with winning team members so that players can interact seeking inspiration from the PM being the celebrated sports legend. But unfortunately, Covid-19 did not allow hosting a grand ceremony in a befitting manner.

For the reason and avoid any delay awards are being distributed in small batches. Due to other commitments of an urgent nature, the Minister could not attend the ceremony. He advised the players to maintain modesty and high standards in life making them role models for their joiners and others who intend to choose sports as their profession. Secretary IPC also emphasized that players should continue their struggle to pursue their set goals in life ahead.

The Secretary-General Pakistan Handball Federation Mr.Javed Iqbal Gill while speaking on the occasion thanked the Federal Minister for IPC Dr Fehmida Mirza and Secretary IPC Muhammad Ali Shahzada for encouraging the players by awarding cash prizes which meant a lot for the players especially at this critical time of need. He also highlighted the past performance of Handball Team in SA Games and proudly stated that Handball Team never returned back from Asian Beach Games without a medal.

The Secretary-General emphasized that like federal government provincial governments may also come forward to support the players enabling them to set high goals and continue achieving laurels for the country through collective efforts. He was of the considered opinion that constant efforts are required to be made for Pakistani youth, a major bulge of the population; so that their energies are canalized into the healthy sports activities.