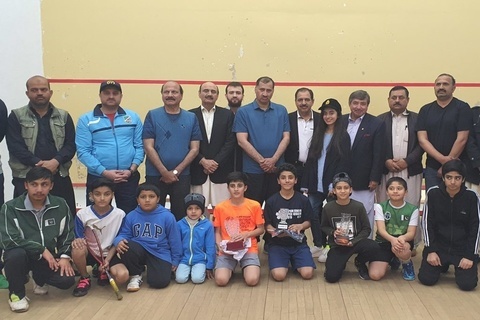 The final match was started on a slow note and both Abdullah Nawaz and Shaki Ullah played defensive game but not giving points to each other as result of long rallies.The final took a pace with Saki Ullah won the first set by 10-12.

After winning the first set, Saki Ullah took another set by 9-11 and succeeding in keeping Abdullah under tremendous pressure.

Both Abdullah Nawaz and Saki Ullah played well and gave each other a tough fight. Saki, who also represented Pakistan in Qatar Open, despite winning first two sets, lost the final.

At the end, Jansher Khan and Obaid Ur Rehman Abassi gave away trophies and cash prizes of Rs. 19000 and Rs. 13000 to the winners and runners-up. A trophy was also awarded to Rayyon Mohib, 12-year-old son of Imran Mohib and a shield to Imran Mohib father Mohib Ullah Khan.