Indian authorities are sitting on the B sample report of Pakistan’s to squash player Nasir Iqbal, a world number 35, without giving any solid reason. 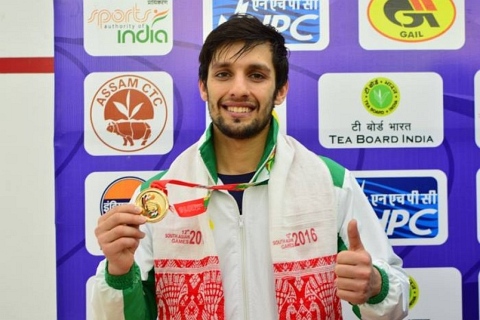 Indian authorities are sitting on the B sample report of Pakistan’s to squash player Nasir Iqbal, a world number 35, without giving any solid reason.

Nasir, who was tested positive for a banned substance during the 12th South Asian Games held in India in a dope test conducted on February 7.
Interestingly, he was given a clean chit in a similar test that was conducted just after two days of the first test.

This clearly indicates the low standards of Indian laboratories as well as their doping authorities as it is impossible for an athlete to have two different reports in such short span of time.

It also gives fuel to speculation that Indian authorities are just trying to destroy the career of a player who won the gold medal in the event.
Indians were sure for a gold in the event having a much higher ranked player in their team but yet Pakistani players turned the table on them.

Despite clear flaws in the dubious process, Pakistan Squash Federation gave go ahead to Indian dope authorities to conduct a B sample test as well The PSF did its level best to send Tahir Khanzada, Nasir’s coach, to oversee the process but visa formalities and other unwanted hazards prevented Tahir from departing to India.
The PSF keeping faith in Indian system asked them to conduct the test and send the report.
After long delays Indian authorities gave April 4 final deadline to announce the outcome of the B sample.
Then they again took further 48 hours, citing holidays but despite lapse of more than a week to last deadline, the PSF and all Nasir are still waiting for the outcome of the B sample report.

Nasir had already suffered huge agony and has forfeited a number of PSA tournaments, as Nasir was barred by WSF and PSA from taking part in the international or even exhibition matches, which is a huge injustice to the youngster.

Pakistan squash suffered badly in Nasir’s absence in the Legends Vs Champions squash series against Egypt in Karachi as with having Nasir services, results could have been different.
If Nasir is guilty, then why Indians are taking so long to announce the outcome and the entire process looks very fishy and some kind of hidden agenda against Pakistan squash is clearly evident.

Talking to The Nation on Saturday, a clearly devastated and teary-eyed Nasir said he was at loss to understand why such harsh and totally uncalled for treatment has been rendered to him.
“I always played for country and as an ambassador of Pakistan I know my responsibilities very well, I can never ever think about betraying country and bring bad name for Pakistan by using drugs or involved in unsporting activities.
It is my humble request to WSF, PSA and PSF to help me out.
”
Nasi questioned that who would be responsible for depriving him from competitive squash if he got a clean chit.

Nasir also strongly doubts Indians and feared that they might manipulate things.
“I request PSF secretary Amir Nawaz to ensure justice.
The PSA should also provide justice to me and not to deduct points as it is not my fault.
I hope the B sample result would be announced in a day or two, so I could get over this nightmare period and focus on my game.
”
PSF Honorary Secretary Group Captain Amir Nawaz said he was in constant touch with Indians.
“I am calling them daily and I don’t know why they are using delaying tactics.
I hope they would hand over the report within next 48 hours.
We had consulted with different WADA officials and we are quite hopeful of the highly favorable report.
I am sure Nasir would come neat and clean and once again play sheet anchor role in helping Pakistan squash, “Amir concluded.