For the first time that Pakis­tan laid hands on the World Cup as defending champions India — six time winner — could not continue their so far unbeatable spree in the gripping final of the World Cup Kabaddi (circle style) at the Punjab Stadium Lahore. 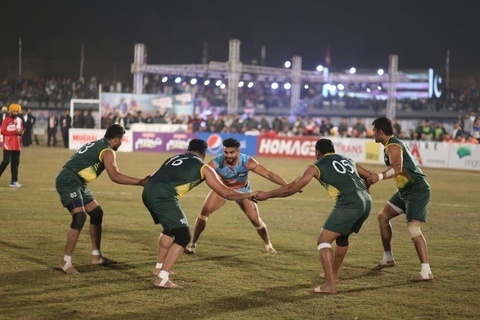 Pakistanis have a habit of leaving the world stunned with their brilliance every now and then. One such case is Pakistan's kabaddi team, when they created history after beating arch-rivals India 43-41 in the gripping final of the World Cup Kabaddi (circle style) at the Punjab Stadium Lahore.

It’s for the first time that Pakis­tan laid hands on the World Cup as defending champions India — six time winner — could not continue their so far unbeatable spree.
Pakistan won the toss and decided to raid first. In the beginning, India, who are highly skilled in circle style, were off to a flying start, as they put pressure on the hosts in the inital few minutes. Pakistan's defence looked fragile as India maintained lead in the whole first half which they won 24-18.
However, the second half was different as both teams fought hard for every point. At one stage the game was evenly poised at 33-33 and 34-34, but the Green-shirts, under the captaincy of Mohammad Irfan Mana took 35-34 lead for the first time in the game.
After that the hosts maintained the lead till sealing a narrow win after a hard-fought battle which was also witnessed by the Pakistan Cricket Board (PCB) Chief Executive Wasim Khan.
Several reviews were taken in the second session on some controversial points. At one stage, two Indian officials ran on to the pitch to protest. However, they were advised to leave the pitch which they did quickly.
Skipper Irfan Mana, Musharraf Janjua, Akmal Dogar, Shafiq Chishti, Waqas Butt and Malik Banyamin played a key role in Pakistan's close victory. Earlier, Iran downed Australia 54-33 in the third-place play-off to claim bronze medal. At half time, Iran were leading 30-16. 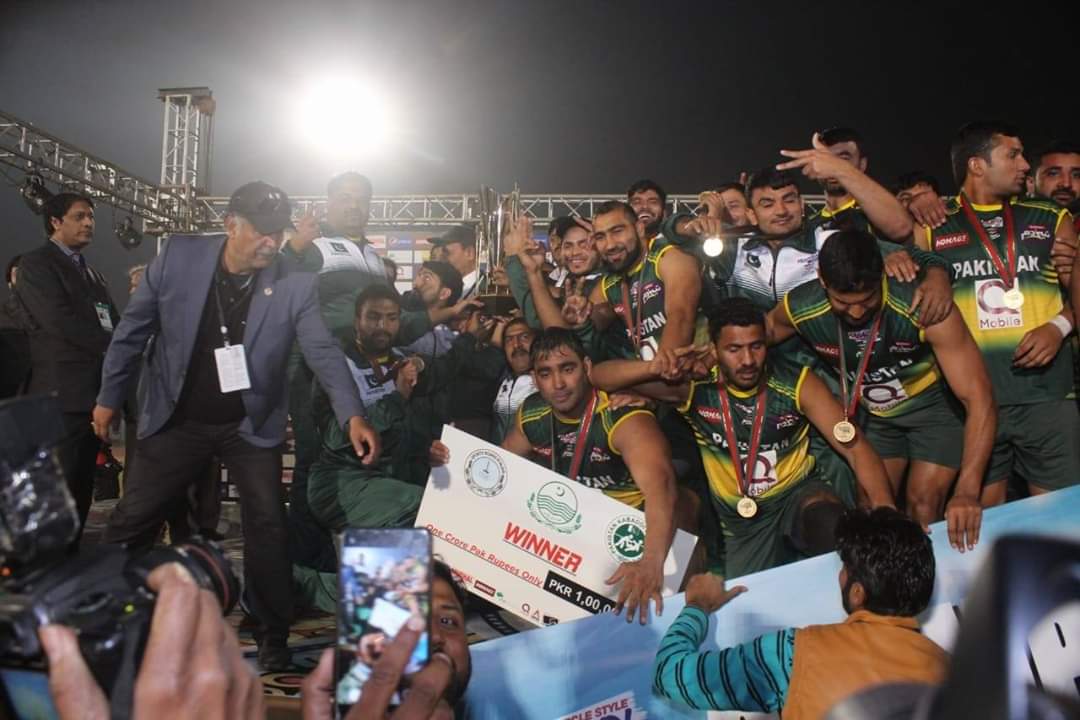 The contest between the South Asian neighbors remained neck-and-neck throughout the allotted time, two sessions of 20 minutes each with a break of five minutes.
Then Pakistan overtook India, the coach of the latter team rose to object a point scored by Binyameen. Indian team’s coach Harpreet Singh intervened in the last moments of the match by raising objection to a point scored by Malik Binyameen but the referee overruled the objection.
Binyameen, who along with Irfan Mana and Shafiq Chishti, proved to be too heavy for their Indian counterparts as the three played a significant role in the win.
The world Kabaddi contest had begun here last Sunday. At least 10 countries — India, England, Australia, Canada, Azerbaijan, Germany, Iran, Kenya and Sierra Leone — participated in the event organised in three Punjab towns — Lahore, Faisalabad and Gujrat.