Pakistan blasted their way into the semi-finals after thumping comparatively inexperienced Australian kabaddi team in a Pool ‘B’ match to book a berth in the semifinals of the Kabaddi World Cup 2020 at Iqbal Stadium, Faisalabad. 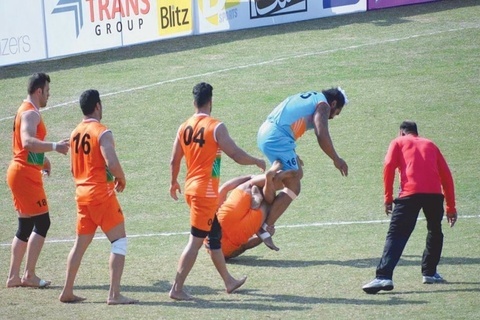 Pakistan blasted their way into the semi-finals after thumping comparatively inexperienced Australian kabaddi team in a Pool ‘B’ match to book a berth in the semifinals of the Kabaddi World Cup 2020 at Iqbal Stadium, Faisalabad.

After defeating Canada comprehensively in their opener at Lahore on February 9, the hosts did a fine job against the inexperienced Aussies, taming them with an enviable ease 62-25.


In Pool ‘A’, India grabbed top spot by defeating Iran 50-39 and confirmed their place in the last 4 stage of Kabaddi World Cup. Iran and Australia are the other two teams, which reached the semifinals from Pool A and B respectively.


Pakistan chose to raid first after winning the toss against Australia. Pakistan raiders skipper Irfan Mana, Lala Obaidullah, KaleemullahJatt, Bilal Mohsin Dhillon were in best form and scored valuable points against Australia. On the other hand, Pakistan stoppers Musharraf Janjua, Shani Basra and Zafar Iqbal and their teammates exhibited similar form during the comfortable victory of their team.

Earlier, after winning the toss, defending champions India maintained their supremacy against strong Iran team winning a tense clash by 50-39. Players from both the sides exhibited top class kabaddi during the tough contest. In the first half, Iranian players managed to carry their points parallel to India at 26-23, however, India widened the points gap in the second half and ultimately won the mach by 50-39.

India’s Deepak Kashi, Navjot Singh Jota, Vinay Khatri and ArshJhola remained prominent performers for the victorious team while MesalQamri, Mustafa Saadqi and Ameer Muhammadi accumulated valuable points for their team. India’s Vinay Khatri and ArshJhola were adjudged best raider and stopper respectively against Iran. It is pertinent to mention here that players of both the teams competed without shirts in the second half following a controversy. The jury ordered the players to play match without shirts on the request of Iranian players.


Though Sierra Leone won the toss against Germany but they lost their match badly by 43-14. Strong German team dominated their opponents in both raiding and stopping departments throughout the match. Germany’s Manpreet Singh and Kuldeep Singh were the best raider and best stopper of this one-sided match. Advisor to Chief Minister Punjab on Sports Malik Umer Farooq and DG Sports Punjab Adnan Arshad Aulakh distributed prizes among best players of the matches.

Today (Friday), two more matches will be played at Zahoor Elahi Stadium, Gujrat. Pakistan will face Azerbaijan in the first match at 2:30pm while the second match will be played between India and England at 3:45pm on the sixth day activity of grand kabaddi event.