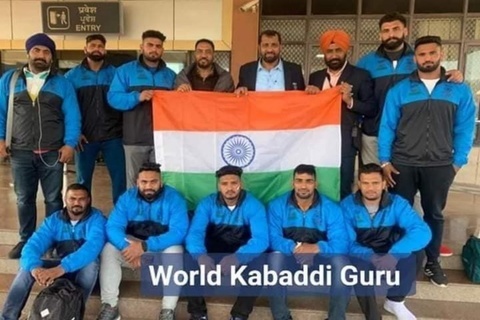 An AKFI press release, a copy of which has been obtained by this correspondent, says:

“AKFI has no information about any kabaddi team to have gone to Pakistan. No permission was ever granted by AKFI to any team to go to Pakistan and play any kabaddi match there,” the AKFI press release said. 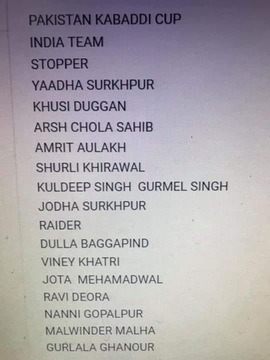 “We came to know about it only after information was sought. AKFI does not support any such activity. Legal action may be taken against the defaulters,” the AKFI said.

AKFI is administered by former Delhi High Court judge SP Grag. India’s sports ministry has also said that the government did not grant permission to any athlete to travel to Pakistan.

“The sports ministry and the ministry of external affairs have not granted any permission to any team, which is mandatory while representing the country at any international event,” a sports ministry source was quoted by Press Trust of India (PTI) as saying.

India’s team reached Lahore via Wagah border on Saturday to feature in the nine-nation global event which kicked-off on Sunday with Pakistan and Iran registering wins over Canada and Sierra Leone, respectively, on the opening day at Punjab Stadium.

Meanwhile, Indian Olympic Association’s (IOA) chief Narinder Batra said on Monday that the team which reached Lahore on Saturday was not an official one from the country and hence could not claim to represent India.

“The IOA has been left shell-shocked after a kabaddi team from India reached Pakistan to take part in the World Championship,” Narinder was quoted by news agency IANS as saying.

“The IOA has not approved and it has also not been approved by the federation so I don’t know who has gone. Whether 60 or 100 have gone, I have no idea. The kabaddi federation, which is a member of IOA, has confirmed that they have not sent anyone. I have seen statements from the (sports) ministry which confirm they have not approved anyone. So I don’t know who they are and what the story is,” Narinder said. “It has got nothing to do with Indian sports,” he added.

“As long as our member unit has not cleared it, they cannot use the word ‘India.’ It has to come through IOA and the government, only then you can use that word. Some individuals with Indian passport go and play there as India, that is not how sports are run. But then, I can never predict anything about Pakistan, that’s beyond my control. They can do whatever they want,” Narinder said.

Union Sports Ministr Kiren Rijiju said: “Misusing the Indian flag or Indian team’s name cannot be allowed for unauthorised tournaments. I will ask the players if they have gone to Pakistan with kabaddi federation’s approval.”

According to Indian English daily ‘The Tribune’, Punjab Kabaddi Association (PKA) sent an “Indian” team to Pakistan for the kabaddi World Cup. The team has been sent by the PKA, whose officials claim that the players are not representing the country but are playing as an “individual unit”.

PKA vice-president Tejinder Singh Middukhera said: “Pakistan Kabaddi Federation is organising the championship to celebrate the 550th birth anniversary of Guru Nanak Dev and since circle-style kabaddi is played only in Punjab, we have got the invitation to participate there.”

“If a team represents a country, it needs the necessary permission from the government,” he added. “But the players affiliated with us went there (Pakistan) on their own and will play as a unit. They have been to other countries, including Australia, New Zealand, Canada and USA, in a similar manner to participate in various tournaments.”

“The Punjab government has not sent any team to represent the state or the nation in any championship in Pakistan. If the PKA is confirming that it has sent the players, they should identify them.”

He did not comment on whether the team had sought permission or not, saying, “It is India’s matter.”