Pakistan Kabbadi team kicked things off in style by trouncing the Canadian team by a huge margin of 64-24 at Punjab Stadium Lahore. 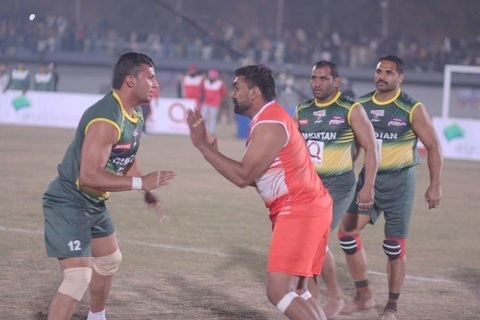 Kabaddi World Cup 2020      Punjab Stadium, Lahore | Iqbal Stadium, Faisalabad | Zahoor Elahi Stadium, Gujrat
In front of a jam-packed Punjab Stadium in Lahore, Pakistan kicked off their circle style Kabbadi World Cup in style by trouncing the Canadian team.
Pakistan, led by Mohammad Irfan, showed great prowess in all facets, trampling the Canadians 64-24.
The win does wonders for the green shirts' confidence as they were beaten by Canada in the semi-final of the World Cup hosted by India in 2012.
At half time, Pakistan was leading comfortably by 34-11 before keeping up the pressure on a Canadian side that has some strong players in their side.

Now, Pakistan team will meet Kenya between 7:30 pm till 8:30 pm on 11th February.
Other than Lahore, Faisalabad and Gujrat will also host some matches of the competition, which is expected to pull huge crowd.
The event is being organised by PKF and Sports Board Punjab (SBP). Earlier, Punjab Chief Minister Usman Buzdar inaugurated the event which will last till February 16. Pakistan is organising the event for the first time.
This is the seventh World Cup being held, with India winning all the six previous hosted by them at their own backyard.