Registrations are still open for the Pakistan Open Blitz Chess Tournament 2020 which is scheduled to be held on 23 January at Pakistan Sports Complex, Islamabad. 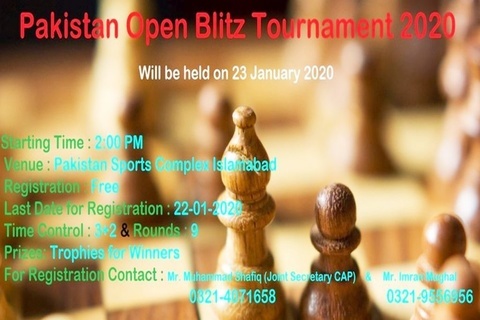 Chess Federation of Pakistan along with Chess Association of Punjab (CAP) is providing a chance for the chess talent existing in Pakistan to show their skills and talent in the upcoming Pakistan Open Blitz Chess Tournament 2020 which will be contested in Islamabad.

The competitions will begin at 02:00 PM on 23 January at Pakistan Sports Complex, Islamabad.

The registrations are free and are open till 22nd of January.

The said championship would be played according to Swiss league system and there will be a total of nine rounds with time control of 3+2.

General Secretary Asian Chess Federation Mr Hisham Al Taher will be chief guest of the event. Trophies with attractive cash prizes for the winners would also be distributed among the winners.