Egypt took 2-1 lead on the first day of their $40,000 bilateral series against Pakistan at PAF Museum 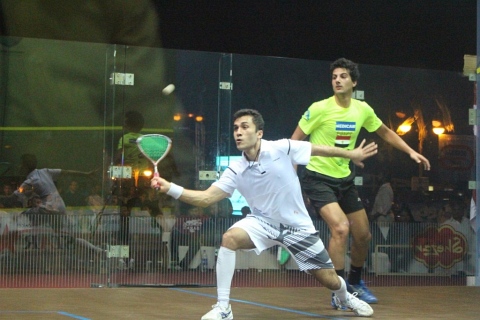 Egypt took 2-1 lead on the first day of their $40,000 bilateral series against Pakistan at PAF Museum here on Wednesday.

The match was formally opened by Jansher Khan and Jahangir Khan, the greatest ever squash players of Pakistan.

It is important to mention that Mazen had been ill since Tuesday night, suffering from cold and fatigue.

The second match was formally opened by Zarak and Qamar Zaman.  In the third match, World No 78 Tayyab Aslam of Pakistan gave tough fight to World No 8 Karim Abdel Gawad of Egypt, but lost the match 2-3.

On Thursday (today), two matches will be played. World No 10 Tarek Momin will play against World No 118 Farhan Mehboob, and World No 22 M Abouleghar will face World No 63 Farhan Zaman.

Pakistan Squash Federation (PSF) secretary Amir Nawaz told ‘The News’ that the winning team would get $40,000, while each Pakistani player will get $2000 in case of losing.

“However, Pakistani team will not get any prize money in case they win this series,” said Amir.

He added that PSF managed to get some sponsors for the event and the total expenses of this series came to about Rs8 million, including the prize money.

The PSF made favourable draws to help Pakistan team, placing their top players against Egypt’s low ranked players to increase the chances of winning.

Jansher, who came from Peshawar to attend this event, told this scribe that this series would help Pakistan squash. “This all is looking very good. The venue is excellent. This is happening for the first time in the country. This will help our players as they will get experience by playing against top Egyptian players,” said Jansher.