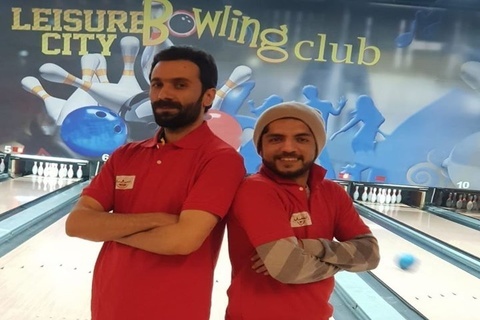 Nasir Dar won the deaf and dumb title after leaving his opponents far behind, while in the most exciting professional masters’ category, Defending champions Saleem Baig and Hussain Chatha dominated Ijaz Ur Rehman, Ali Suria and others.

Daniyal Ijaz, who had won the U-16 title, is in the amateurs singles final round and all set to give a tough fight to his competitors.

Total 30 pairs were fighting hard for the top honours in the men’s doubles category.

The pair of Saleem/Hussain were favourites in the event. However, the competition was tough this time, as three-time national champion Ijaz Ur Rehman was paired with his 14-year-old son Daniyal, who was enjoying overwhelming crowd support.

After the first round, it was four-way battle among Ali/Sikandar, Ijaz/Daniyal, Saleem/Hussain and Afzal Akhtar/Saqib, who all qualified for the final round. Two games were for the each pair in the final round. Ali scored 334 pins, while his partner Sikandar contributed 353 pins, which enabled them to post total 687 pins.

Shocking results were witnessed in the men’s singles event, in which Saleem Baig performed better than his opponents. Total 40 top professional bowlers, including former national champions, were in the run to grab the title.

In the deaf and dumb event, Nasir (Islamabad) won the title with total of 299 pins, Raza Ullah (Peshawar) clinched the second position with 271 pins and Suhail Butt (Peshawar) secured the third spot with 226 pins.

More than 300 bowlers from across the country are participating in the mega championship, which comprises singles (professional), doubles, team, amateur, deaf, ladies, U-16, media, inter-school, inter-college and inter-university categories.

Prize distribution ceremony will be held after the finals.

Pakistan Tenpin Bowling Federation (PTBF) Secretary Ijaz ur Rehman said: “Total 20 bowlers will be selected from the championship for training camp and on the recommendations of the coaches, the bowlers will be further short-listed to represent the country in international events. I am very happy that bowling sport is gaining popularity with each passing day and now we have around 10,000 bowlers in the country. We will soon start talent hunt programmes in different cities and give best opportunities to the talented bowlers.”