Daniyal-ur-Rehman left all his opponents trailing in the final round to win the Under-16 title of the Pakistan Open Tenpin Bowling Championship 2019 at Leisure City Bowling Club, Rawalpindi. 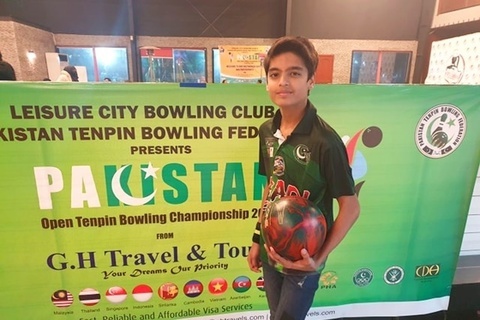 Pakistan Open Tenpin Bowling Championship 2019      Leisure City Bowling Club and Leisure Cuisine
14-year-old Daniyal-ur-Rehman left his opponents trailing in the final round to win the Under-16 title of the Pakistan Open Tenpin Bowling Championship 2019 at Leisure City Bowling Club, Rawalpindi.
Daniyal booked his place in the final round of the amateur category with sensational performance and once again proved his supremacy in the juniors category.
Total 30 junior players took part in the U-16 category, which was a four-way battle right from the start. Two games were given to each player in the first round and after completion of the round, eight players were left to play the quarterfinals.
Abdul Rafey Saqib, Ayaz Ur Rehman, Daniyal’s younger brother and Abdul Wasey Saqib were fighting for the second place, while Daniyal was easily ahead of the pack.
Interestingly, all the four players left in the race were real life brothers.
The jam-packed arena watched as two games were awarded to each of the four players in the final round, in which Daniyal managed to score a whopping 197 in the first game before committing some mistakes in the second game. He finished the second set of game with the score of 122.
His closest rival Abdul Rafey started the first game very poorly and scored only 132 points before bouncing back and scoring 134 in the second game. However, Abdul Rafey’s total score was not even close to challenge Daniyal's tally.
Ayaz Ur Rehman had a poor round as he managed to score 111 in the first and only 100 in the second game.
Abdul Wasey squandered a great opportunity to overtake Ayaz but scored only a 98 in both his games.

Daniyal won the title with total of 319 points, while Abdul Rafey grabbed the second place with 266 points. Ayaz bagged the third spot with 211 points and Abdul Wasey settled at fourth place with 196 points.
Daniyal said: “Frankly, my focus was on main title, rather than U-16. I want to become a true champion like my father Ijaz Ur Rehman and take a step further to win a major international tenpin bowling tournament. My father had contributed a lot for tenpin bowling in the country. His services and sacrifices have improved the game, as we are witnessing so many bowlers in the country. When my father introduced this sport, there were hardly few bowlers in the country. My basic aim is to play at international level and win major titles. It is my father’s dream to give a true champion to the country and I will try to fulfill the dream soon.”