Daniyal left all the seniors behind in the amateur category to grab top position after the first round of matches were played at Leisure City Bowling Club, Jinnah Park, Rawalpindi. 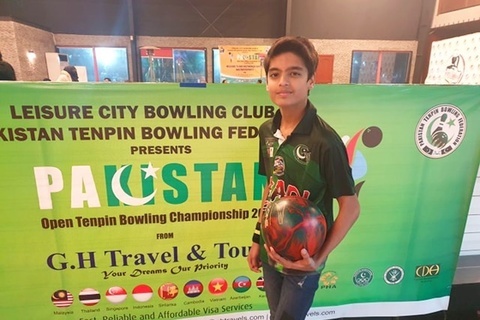 14 year old bowling sensation, Danyial Ur Rehman, son of Pakistan’s arguably most decorated bowler Ijaz Ur Rehman, created huge waves in the Pakistan Open Tenpin Bowling Championship-2019, as he left all the seniors behind in the amateur category to grab top position after the first round of matches were played at Leisure City Bowling Club, Jinnah Park, Rawalpindi.

Danyial, who narrowly missed the title last time around, once again continued his brilliant run in the mega event, where the likes of top amateurs like Faheem, Imran Mani, Farukh and Mehboob were in action, but the youngster had no fear of playing against the best in the business and showed he had the blood of a champion in him, by playing highly world class games of bowling, which mesmerised the pack to capacity arena.

In total 45 bowlers form across the country tried their luck in the amateur category, in the first round each bowler was awarded two games each.


After the first round major surprises were witnessed as few of the biggest names in this particular category bowed out at the very first hurdle, in the absence of defending champion Shahrukh, who opted to play in the professionals category, Danyial took the centre stage.

Enjoying a considerable lead after pre-quarterfinals, Danyial started to show sign of nerves and was committing too many costly mistake. He was missing strikes and  guttered the ball twice. Staring at elimination, he managed to recover and book a place in the semifinal. 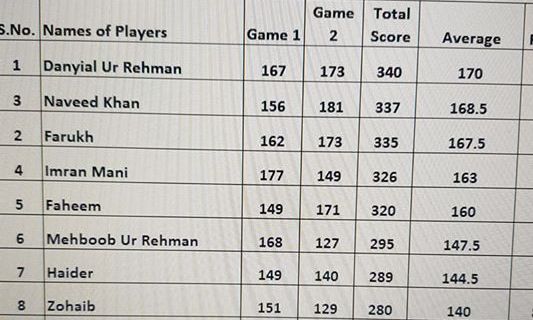 Backed by the crowd and his father, the three time national bowling champion, Danyial, started the semi-final round with new pledge and confidence.

After first round, the youngster managed to bridge the gap to just 10 pins and in the middle of the second and final round, Danyial overtook all his opponents and entered the final round as top finisher with total of 340 points. He scored 167 in the first game and 173 in the second game and ended with the average of 170.