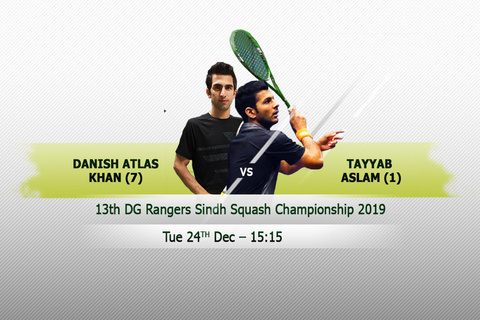 13th DG Rangers Sindh Squash Championship 2019      Rangers Jahangir Khan Squash Complex, Karachi
Top seed Tayyab Aslam will now take on seventh seed Danish Atlas Khan in final of $12,000 13th DG Rangers Sindh Squash Championship 2019 at Sindh Rangers Jahangir Khan Squash Complex, Karachi.
Tayyab Aslam overcame a spirited Waqas Mehboob 3-1 by the scores of 11-5, 12-10, 11-7, 11-3 in their semifinal to set up a date with Danish Atlas Khan in the final.
Tayyab started the first game on a high note as he displayed high-quality squash and succeeded in winning the first game with a margin of 11-5. Waqas bounced back in great style in the second game, as he played superb squash and grabbed the game 12-10.
Tayyab, who recently won the Pakistan International Squash title, showed his class and potential and never gave any chance to his opponent after the second game hiccup as he sealed the next two games with the scores of 11-7 and 11-3 respectively and registered a well-contested victory in 38 minutes.
In the second semifinal of the day, Danish outclassed second seed Asim Khan 3-1 in 55 minutes. Danish faced some resistance from spirited Asim before winning the first two games 11-8 and 11-9.
Aism then fought back well and won the third game 11-8 but Danish was in no mood to give his opponent any space to make a good comeback. He bounced back in style in the fourth game and clinched it with the scores of 11-9 and with it a place in the final.
In the women’s semifinals, third seed Amna Fayyaz scored a upset victory as she stunned top seed Rushna Mehboob 3-1 in 32 minutes.
Amna dominated the semifinal right from the word go, as she won the first two games 11-6, 11-3. Rushna showed her class in the third game and won it 11-9. Amna, however, once again started playing well and prevailed over her opponent, winning the game 11-8, thus earning a place in the final against Faiza Zafar, who thrashed Zaynab Khan 3-0 in 16 minutes in the second semifinal.
Faiza easily won the first two games with same margin of 11-4, 11-4 while she won the third game in a dominant fashion by 11-5.