World no. 61 Tayyab Aslam put in a sublime display to overcome compatriot Farhan Mehboob by 3-0 at Mushaf Squash Complex, Islamabad to be crowned champion of the Serena-Huawei Pakistan International Squash Championship 2019. 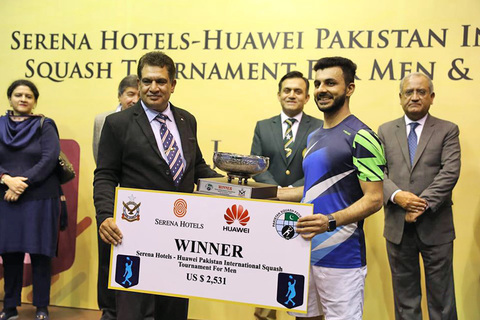 Serena Huawei Pakistan International Squash Tournament 2019      Mushaf Squash Complex, Islamabad.
For the first time since 2016, two Pakistanis contested the final of this PSA event where World no.61 Tayyab Aslam put in a sublime display to overcome compatriot Farhan Mehboob by 3-0.
In a thrilling opening game of the historical final, Tayyab produced a masterclass of attacking squash to take an early 5-1 lead.
31-year-old Farhan, however, made a tremendous comeback to level the game at 8-8. The 2019 South Asian Games Gold Medalist, Tayyab, then raised his game and never allowed Farhan any further chances and took the first game 11-8.
In the second game, a number of early errors from eighth seeded Farhan set the tone for Lahore-born Tayyab as he powered through to a 7-1 lead. Farhan, unwilling to give up, stormed back to level the game at 8-8 and then at 11-11.
Nephew of eight times world squash champion Jansher Khan, Farhan Mehboob, suddenly looked overawed by the occasion as a number of costly errors handed the second game to Tayyab by 13-11.
There was no stopping Tayyab in the third game as Farhan was unable to maintain his momentum. The world the No. 61 Tayyab, raised his game and attacked from all areas of the court to capture the final game by 11-4 and secure a 3-0 win.

Tayyab kept Farhan on court for 40 minutes to win with the final score line of 11-8, 13-11, 11-4.
The two are developing a rivalry of sorts, as Farhan Mehboob recently defeated Tayyab at the National Games while in the last PSA event staged in Karachi prior to the National Games, Tayyab came out the victor.
The women's title was sealed by the American Sabrina Sobhy who won the women's title of the $12,000 Serena-Huawei Pakistan International Squash Tournament 2019 by overpowering Egyptian Hana Moataz 3-0 in just 30 minutes.
Vice Chief of Air Staff Air Marshal Asim Zaheer graced the closing ceremony as chief guest and distributed prizes and trophies among the finalists. CEO Serena Hotels Aziz Bolani, squash legend Qamar Zaman and squash lovers were also present on the occasion.
Watch the Serena Hotel-Huawei International Squash C’ship 2019 Final: