Another call for talented chess players to take part in the 2020 Punjab Junior Qualifying Chess Championship which is scheduled to be held on 23rd January at PSB Coaching Center in Lahore. 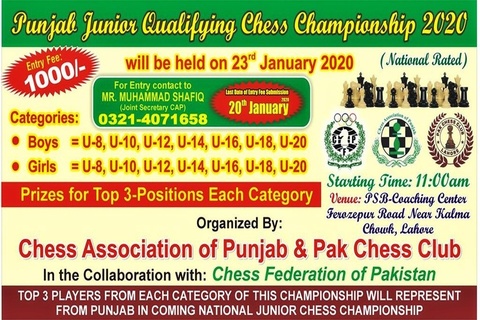 Competitions will be held for both, boys and girls in a total of seven different age categories which are stated below:
All the participants, with no exemption, must be registered member of Chess Federation of Pakistan (CFP) and must have National ID number to take part in this event. Each member district of Chess Association of Punjab (CAP) has the right to enter 02 players as official/invited players entitled to FREE ENTRY for the said period subject to the following conditions:
The said championship would be played according to swiss league system or round robin. Latest FIDE laws will govern the event. The time control will be 25 minutes with a 10 seconds increment for every move played starting from the first move and will be rated by Chess Federation of Pakistan.