Pakistan earned a hard fought victory against India 30-29 to clinch gold medal at South Asian Games (SAG) 2019 which are currently underway in Nepal. 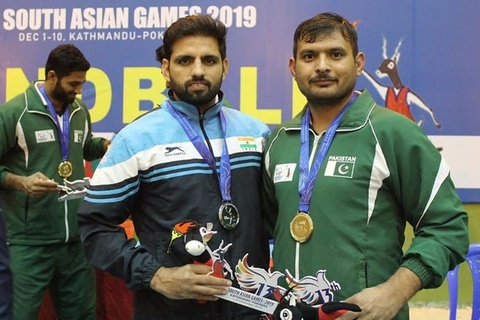 Pakistan men's Handball team was going strong from the very start as they marked their first victory of the event by completely crushing the hosts, Nepal, with the final score of 43-19.

Sri Lanka was handily beaten by the green team in their second group game by 42-20 to continue their impressive run in the tournament.

The green side was then up against Bangladesh in the semi-final match where they successfully booked their spot in the final stage defeating the opponents quiet easily by 28-17.

Pakistani players then faced the rivals, India, in the final match where they were seen struggling against the opponents who themselves were casting strong game play in the match.

But the green shirts eventually earned the gold medal after a tough fight on the final score line of 30-29.

Whereas the Women's Handball Team of Pakistan enjoyed a good start as the players registered their first victory against Maldives convincingly beating them 32-27 in their opening match but did not perform well in their second game against the India, falling to them 45-24.

Pakistan then suffered another loss in their semi-final match at the hands of the hosts team, Nepal, with a narrow score line of 21-22 but could not secure the bronze medal on offer as they were beaten handily by Bangladesh women's team 31-15 in the third place match.