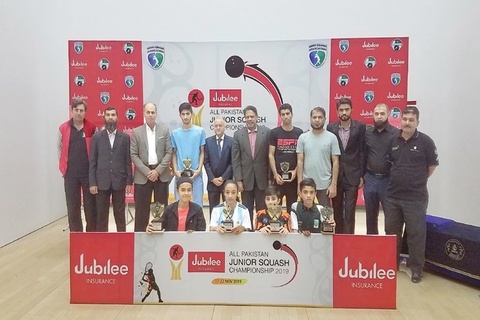 Jubilee Insurance All Pakistan Junior Squash Championships 2019      PN Roshan Khan Jahangir Khan Squash Complex, Karachi.
Hailing from Peshawar, the 18-year-old Uzair Shaukat put up a resolute performance while upsetting top seed Zeeshan Zeb of PAF in four grueling games to clinch his maiden boys U-19 title in the Jubilee Insurance All-Pakistan Junior Squash Championship at Roshan Khan-Jahangir Khan Squash Complex, Karachi.
Second seed Uzair, made a great comeback from a game down to post an awesome 3-1 victory over his superior opponent in 41-minutes amidst applause. The triumph also helped Uzair avenge his two preceding defeats that he had suffered at the hands of Zeb in the DHA and Islamabad events in the recent past.

Jittery in the beginning Uzair was nowhere in the first game but with remarkable resurgence he changed the tide in his favour winning the next three games that witnessed neck-and-neck scores.
He had one junior international U-17 title under his belt that he won at Qatar in 2017 besides finishing runner-up at a Malaysian competition the preceding year in the same category.

The final score line was 4-11, 11-9, 13-11, 11-9.
Top seed Zainab Khan did Sindh proud by capturing the girls U-19 title by getting the better of second seed Komal Khan of Khyber Pakhtunkhwa also in four games. Zainab took 27 minutes to post 11-2, 11-6, 6-11, 11-1 victory over her opponent.
The boys U-13 title went to top seed Abdullah Nawaz of PAF who accounted for Sindh’s Muhammad Zaman 11-7, 11-7, 7-11, 11-9 in 27-minutes final.
The winners of each category earned Rs19,000 while runners-up received Rs13,000 apiece from CEO of Jubilee Insurance Tahir Ahmed at presentation ceremony after the finals. The organisers have allocated equal purse of Rs100,000 apiece for all categories aimed at encouraging the youth.
Also present at the closing ceremony were squash legend Jahangir Khan, secretary Sindh Squash Association Rashid Ahmed, Shahjahan Salahuddin and Imran Haroon.
Boys U-19 Final results:
Girls U-19 Final results:
Boys U-13 Final results: