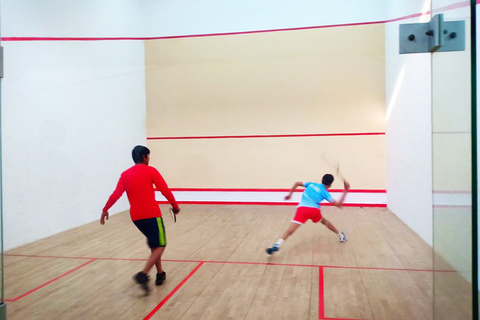 Jubilee Insurance All Pakistan Junior Squash Championships 2019      PN Roshan Khan Jahangir Khan Squash Complex, Karachi.
Squash sensation Abdullah Nawaz continues his vivid form in the ongoing Jubilee Insurance All Pakistan Junior Squash Championship 2019 being played at Roshan Khan-Jahangir Khan Squash Complex, Karachi.
Abdullah, having won the recently-concluded national junior squash championship in Islamabad, is in the best form of his career as he produced a tactically astute game plan to utilise his skills and experience against Nadeem' passive spell in the match, winning the first game 11-7.
Abdullah continuously put work into the legs of Nadeem to seal the second game with the same stcore at 11-7. Nadeem then went back to the tactics board and managed to win the third game at 11-7.
In 29 minutes encounter, Abdullah bounced back strongly as he began to stretch Nadeem around the court again and claimed the victory.
The final score line was 11-7, 11-7, 7-11 and 11-4.
Meanwhile, another upcoming local player Zaman ended Zuraiz’s winning streak with an imposing display with the scoreline 11-4, 11-6, 11-2 to storm into final where he faces top seed Abdullah Nawaz of the PAF.
The finals will be played today (Friday) at 3:00pm. Jubilee Insurance CEO Tahir Ahmed will grace the concluding ceremony as chief guest.
Boys U-13 semifinals Results:
Boys U-19 semifinals Results:
Girls U-19 semifinals Results: