Saad Ali is in pole position to become Pakistan’s first Formula 1 driver, a seemingly impossible target in a country with no race tracks and where all sport sponsorship money is poured into the national obsession — cricket. 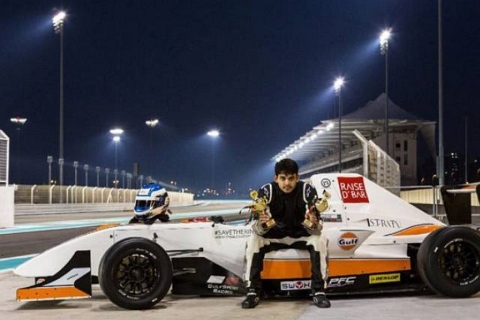 Saad Ali is in pole position to become Pakistan’s first Formula 1 driver, a seemingly impossible target in a country with no race tracks and where all sport sponsorship money is poured into the national obsession — cricket.


The 28-year-old faces significant hurdles before he can become one of 22 elite drivers at the pinnacle of motorsport, but a decade after his “clueless” beginning as a college dropout hooked on racing, he is edging towards his target.

This photograph taken on March 3, 2016 shows Pakistani racing car driver Saad Ali speaking during an interview with AFP in Islamabad. Saad Ali is in pole position in the race to become Pakistan’s first Formula 1 driver, a seemingly impossible goal in a country with no training facilities and where most sponsorship money is poured in to cricket. PHOTO: AFP

“As a kid I was always interested in cars, but there was no racing in Pakistan, it was not even on television,” he says.

He competed in the Formula Gulf 1000 series in 2014, reaching the podium to take third place twice in one weekend in Abu Dhabi.

Describing that race as a “big stepping stone”, he adds it was “proof to me that this is something that I could pursue and achieve”.

Now he must conquer the Formula 3, GP3 and GP2 classes, seen as stepping stones on the road to Formula 1.

It is also expensive.

“I have been racing by myself for the country without support, flying the Pakistani Flag on circuits making a name for racing (here)” says Ali, who last year was only able to compete in go-karting’s 2F2F Endurance Grand Prix in Pakistan due to the sheer costs of taking part in motorsport.

Currently, he uses the money earned from his job at information technology company Swiftclick, and his documentary-film work to fund his obsession.

He has more races later in 2016. But estimates he will need around $2 million in sponsorship over the next three or four years to achieve his dream of racing alongside the likes of Sebastien Vettel or Lewis Hamilton.

Right now, he has to make do with a simulator at his home, where he practises his manoeuvres.

The odds of international successes are against him. “There are very few people in the world who make a living from driving racing cars — and even fewer in F1,” Matthew Marsh, a leading F1 TV commentator and former racer, tells AFP.

The absence of any sort of official motor racing in Pakistan beyond go-karting means he is unlikely to find the deep wallets he needs there.

But Ali says building tracks would not only boost the economy but help save the lives of restless young Pakistanis who take their need for speed underground.

This photograph taken on March 27, 2014 shows Pakistani race car driver Saad Ali preparing to drive at the Yas Marina circuit in Abu Dhabi, UAE. Saad Ali is in pole position in the race to become Pakistan’s first Formula 1 driver, a seemingly impossible goal in a country with no training facilities and where most sponsorship money is poured in to cricket. PHOTO: AFP

One 22-year-old racer who asked to remain anonymous told AFP that races take place in Pakistan’s major cities in the dead of night despite accidents and police chases.

“There have been accidents, some really bad in which people have died, but this thing goes on as you cannot restrict youth,” he says.

“If there is a proper track, the risk of accidents would be minimised and the passion of young people for racing could be groomed,” he argues.

Start Your Engines: Jeep rally to be held in Chitral today

Ali agrees, saying: “The first thing that we need in the country is a race track… People who are racing on the roads, they will go to that particular facility and their need for speed and everything can be brought out in a very, very safe manner”.

Baber Kaleem Khan, editor of the Pakwheels.com motoring blog, says there would be an economic benefit.

“Motorsports isn’t just a sport, it is a massive capital generating program as well,” he says.

“Engineering development that goes on in the car, the training of the driver, the staff and students, the product and the commercial development, it has a trickle down effect on local businesses who could develop and export parts from here.”

Ali become interested in racing when he was in college in Islamabad in 2006, adding: “I was absolutely clueless as nobody in Pakistan had done professional race car driving”.

He dropped out and went to the Formula BMW Racing Center (FBRC) Bahrain, where aspiring drivers can learn the art of racing.

“After three days of training I joined the racing school’s championship,” he says, describing the decision as a “pivotal” point in his life.

Sitting in a claustrophobic racing car for the first time nearly put the brakes on his F1 dream, he admits.

“When you sit in a race car and you put on the helmet, you can’t breathe properly,” he says, adding that with the seat belts so tight they left three inch marks branded on his shoulders, he could only get his lungs about half full.

But he pushed through and has since been racing in the Formula BMW and Formula Renault circuits.

The scale of what he is trying to do has not escaped him. “If you go to Formula 1 that’s 22 of the best drivers competing against each other.”

But, Ali believes, if he was given the opportunity, he would “definitely achieve a lot more….The thrust is there, the desire is there, the fire and the hunger — everything is there”.