The second round of the 4th Desert Thal Jeep rally concluded in which 49 vehicles participated in the stoke category. 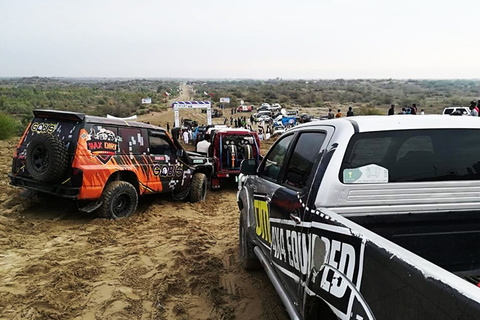 Tourism Development Corporation of Punjab (TDCP) has organised 4th Thal Desert Rally 2019, in the midst of Thal Desert covering District Muzaffargarh and Layyah.
The second round of the 4th Desert Thal Jeep rally concluded in which 49 vehicles participated in the stoke category. Commissioner DG Khan division Mudassir Riaz Malik inaugurated the second round of the rally while DC Muzaffargarh Ali Shahzad and others were also present.
Two women, including Salma Khan and Zoya Khan, also participated in the rally.
Commissioner Mudassir Riaz said that tourism was being promoted in the province under the vision of Prime Minster Imran Khan.
He said that such events would provide healthy entertainment to the masses which would also help promote tourism and local culture.
DC Ali Shahzad said all possible steps had been taken to make the jeep rally a success and extra vehicles were participating in the race as compared to the previous year, adding that foolproof security arrangements had been made.
Meanwhile, in an autumn festival, renowned singers, including Maratab Ali, Nadia Khan and Ijaz Rahi, also performed in the musical night during the rally.