Nasir vows to get his name cleared from doping

Pakistan top squash player Nasir Iqbal, who is also world number 35, pleaded his innocence and termed doping allegations against him as completely baseless and vows to fight to clear his name 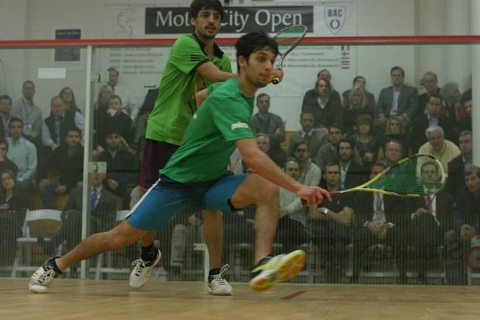 Pakistan top squash player Nasir Iqbal, who is also world number 35, pleaded his innocence and termed doping allegations against him as completely baseless and vows to fight to clear his name.

Talking to The Nation, Nasir said: “I was the only player, whose dope test was taken twice, first on February 7 and then again on February 10.
How is it possible the test taken on 7th was positive and only three days later, the taken test was negative.
If a banned substance is used by an athlete, it remained in the blood for at least 4 to 6 months
“I had deposited $220 and further $40 as a fee for B sample test and I am quite sure, I will come out neat and clean, but I want to know one simple thing from the responsible, when I get clean chit, who will be held responsible for piling pain, grief and agony, which not only me but my, squash fans and the country has to face,” he questioned.

He said that he was aiming high and taking giant strides in the PSA rankings.
“I already suffered as I was not able to play in the $70,000 Cangry Wharf, where I was in the main round and I have to miss British Open as well.
Besides missing $15,000 and $10,000 events in Pakistan and it is highly likely, I have to miss challenge series against Egypt as well next month.
I have already suffered huge deduction in ranking points and to miss around a whopping 1000 ranking points in next few months.
My PSA ranking will drop to 50 or more and downslide will continue till my name is cleared.
”
He said: “Pakistan is the defending champion of Asian senior team championship, which will be held in China in May.
I carry the hopes of entire nation on my shoulders.
I don’t know what is the agenda, why I am given such a harsh and totally uncalled for treatment? I had already informed the organisers of South Asian Games that I was taking vitamins and nothing else.
My entire career is neat and clean and I never ever used or tried to be involved in below dignity activities.
I know my responsibilities very well and I can never even think about letting down my country, fans and my family’s prestige and dignity.

“Squash is in my blood, I am sure the Pakistan Squash Federation (PSF) will deal the situation very well.
They have appointed highly experienced Tahir Khanzada, who will depart to India and B sample will be opened in front of him.
I am quite optimistic that justice will finally prevail, but I can never forget the pain and agony, I had to go through.
My dad is quite old and only God knows, how he survived this body blow.
I fell ill for several days, but I never lost hope, because I strongly believe in Allah Almighty and it is my belief, with His grace, I will come out of this menace and once will be ready to help my country win world titles,” Nasir concluded.

Sharing his views, PSF honorary secretary Group Captain Amir Nawaz said: “It is not about Nasir now, but it is about Pakistan.
We will fight till the justice prevails.
We are in constant touch with world squash bodies, I will take up the case with the WSF and ask them to allow Nasir play in exhibition matches unless he is proven guilty or innocent.
He is our pride and entire Pakistani nation is right behind Nasir.
Jahangir Khan is also onboard and we are sending Tahir Khanzada to India.
I am quite sure, Nasir will get clean chit.