World No 4 Omar Mossad and four of his team-mates will be seen in action in the Pakistan-Egypt Invitational Squash Series in Karachi on April 6-7. 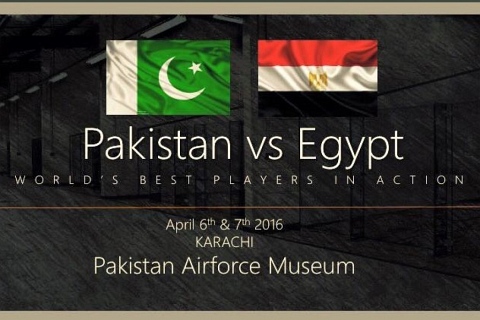 World No 4 Omar Mossad and four of his team-mates will be seen in action in the Pakistan-Egypt Invitational Squash Series in Karachi on April 6-7.

The series, the purpose of which is to portray a soft image of Pakistan at the international level, will be played in the portable four-side all-glass court that will be specially installed at the PAF Museum.

“We want to show the world that the tournaments can be held anywhere in the country without any security fears,” he said.

The winners of the series will pocket a handsome prize of $40,000.

Razi said the forthcoming Pakistan-Egypt series would be a major event and would help revival of not only the country’s squash but would also be instrumental in bringing back international sports events to Pakistan.

“We have hired the Pakistan Super League’s (cricket) project director Salman Sarwar Butt for the series,” he said.

“The Pakistan Super League was a successful tournament and gave good projection to Pakistan. But it was held outside Pakistan. We are holding the international squash series in the country and doing our bit in helping revive international sports in Pakistan.”

National junior and women players will also get an opportunity to play inside the portable four-side all-glass international standard court when they figure in matches on April 4-5. The invitational series will be followed by a $15,000 PSA tournament as the same venue.

Razi informed that Pakistan have two such portable courts. Egypt organised a tournament in all-glass court with the Pyramids in the background and Hong Kong did it with it harbor as its backdrop.

“We will have the PAF aircrafts in the background,” he said.

The AVM said the federation was also looking forward to holding another major event sometime in October. “It will be like a premier league with the participation of local as well as international players,” he said.

A Pakistan Squash Federation said in a press release that it was expecting that such an initiative (the Pakistan-Egypt series) would help the PSF vision of game revival, promotion of squash at mass level along with fund generation through the corporate sector.

“It would also help the PSF in bringing more international players to Pakistan for the upcoming $25,000 PSA tournaments planned in 2016 in Islamabad,” the statement said.