Sohaib Club won both of its matches played on the first day of National Beach Handball Club League 2019 which is being held at the International Sand Court of University of Agriculture in Faisalabad. 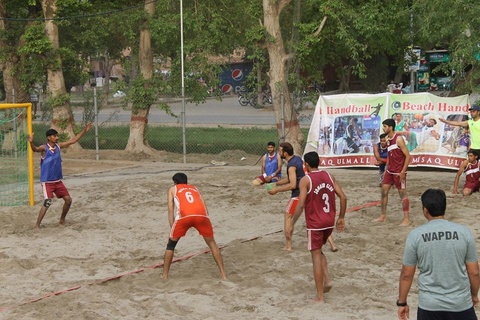 A total of 4 matches were played on the first day of National Beach Handball Club League which has been organized by Pakistan Handball Federation.

The first match for the day was played between Sohaib Handball Club and Misaq Handball Club in which Sohaib Club claimed the very first win of the championship by winning the match on 2-0 score. But it was a nail-biting match between both the team as either side was not giving the other team the chance to score for their side but it was Sohaib Club that ended the first set in their favor on 16-15. Misaq Handball Club was not able to claim the second set as well as the winner team won the second set by 15-14 but had to struggle hard as the losing team lost the game just by 1 point in the second set and 2 points in total.

The second match in the day witnessed Lyallpur Tiger team's win over Afghanistan's handball team by 2-0. It was a one-sided encounter as Lyallpur Tigers totally dominated both the sets and completely crushed the Afghani team, first by 20-4 and then by 26-18.

Chishtian Handball Club and National Handball Club were battling for the win in the third clash, when Chishtian team marked their first victory by 2-0. Set scores were: 20-18 and 21-20.

The last match of the day once again saw Sohiab Club registering their second win and Afghanistan Handball team once again losing by 2-0 as the final score. Afghani players performance fell in their second match as well when they completely lost the game by both the sets, 28-9 and 20-11.