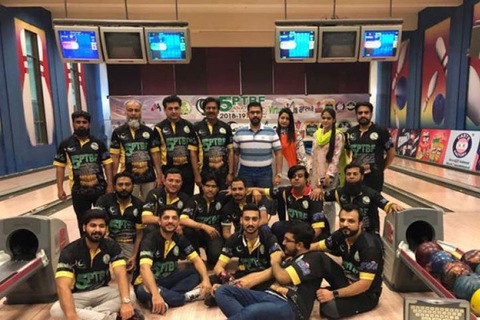 5th PTBF National Ranking Tenpin Bowling Championship-2019      Arena Bowling Alleys Karsaz, Karachi
Aleem Agha continued his dominance in the 5th PTBF National Ranking Tenpin Bowling Championship-2019, Masters Singles category, as the veteran had 36 pins lead over his nearest opponent Farhan Riaz after completion of 16 games at Arena Bowling Club, Karsaz, Karachi.
The first squad included four national champions in the form of Ijaz Ur Rehmna, M Hussain Chatha, Saleem Baig and Ali Suria. It was battle royal on cards and reputation on stake for Ijaz, Chatha and Ali Suria, who were almost down and out after the first day of Masters Singles, as Chatha and Ali were not even amongst top 15 and majority of the first 15 places were occupied by unknowns.
But when chips are down and it matters most, a true champion shows and proves his class. Same happened as Ijaz, Chatha, Shabbir Lahkarwala, Ali Suria, Robert all bounced back in style to come back in the hunt and pose serious challenge for top 16 finish.
Only Saleem was at number two after the completion of first round. The organsiers had made the task of the bowlers very difficult as they had decided to include 24 games, eight games every day in three days, which is quite hectic and made the bowlers highly tired.
Local bowlers, who had been playing at same alley for years had the advantage and were also fresh, while Islamabad bowlers, who reached Karachi same day or a night earlier were the worst affectless.
That was the reason behind after second day 6 of the top 10 positions were occupied by the Karachi bowlers and interestingly none of them is a known bowler with the only exception of Aleem Agha, who is although very senior, but had never won any major title in his entire career.
Aleem stamp his authority further by holding on to the top position on the second day as well and is highly favourite to seal a place in the last 16 at least. Aleem finished day-2 with a massive score of 2991 pins after 16 games completion, while he was followed in the second by another surprise package Farhan Riaz, who had scored 2955 pins.
Former national champion, Saleem Baig, who was at number two on day-1 was pushed to number 3 with total of 2947 pins. Haroon Anwar was 4th with 2940 pins. Usman Ghani, who was at number 4 on day-1 was pushed to number 5 with total of 2912 pins while Saqib, the future of Pakistan bowling, was in highly impressive form and was at number 6.
The most astonishing recovery was made by none other than Chatha, who grabbed 7th slot, as he was at number 21 on day-1. Robert, Ijaz and Sajjad were occupying 8th, 9th and 10th places. 16 bowlers will make it to final round, where two games each will be allocated to them, while Trios category will start late Saturday night.
The second day of the masters singles begin at 6:00pm with 18 bowlers in the first squad and as many bowlers in the second squad in the night session, the second day competitions started at 6:30pm, the entire arena was packed to capacity.
The organising committee headed by Khawaja Ahmed Mustaqeem took strong notice of The Nation story regarding poor arrangements and pathetic condition of the Arena and things were back to normal, the management of the Arena was very much present at the lanes, supervising the games. The lanes were not only properly cleaned but oiled as well through state of the art oiling machine, especially brought from Islamabad.