Pakistan’s top-ranked squash player Tayyab Aslam will feature in 2018-19 PSA World Championships which will be held in Chicago from February 23 to March 2. 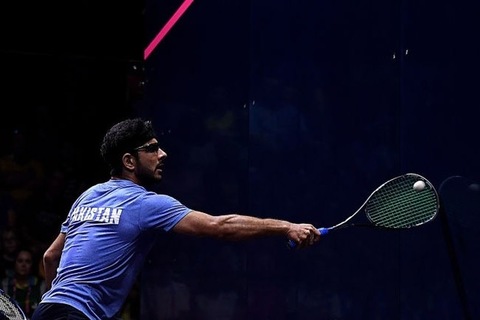 Pakistan’s top-ranked squash player Tayyab Aslam will feature in 2018-19 PSA World Championships which will be held in Chicago from February 23 to March 2.
Tayyab, who is ranked 55th and won three PSA events in 2018, is the only Pakistani player to have entered the main round, on the basis of his ranking.
The 2018/19 Professional Squash Association World Championships will become the first squash tournament to award a $1 million prize as part of a multi-year sponsorship deal with the Chicago-based Walter Family while the women’s and men's prizes are the same.
Pakistan’s Shahjahan Khan is also playing this event as an invitee. Promising squash player Shahjahan achieved this by winning the $10k PSA 7th Annual Simon Warder Memorial Prostate Cancer Squash tournament 2018 in Canada where he beat Henrik Mustonen from Finland in a tough five-game final.
As part of the agreement, the city of Chicago will host the tournament for the next two cycles, in winter 2019 and 2021, and it will be renamed The Walter Family PSA World Championships in those years.
Over 25 nations will be represented in Chicago and Egypt’s World No.1 Mohamed ElShorbagy and Raneem El Welily will top the seedings for the 2018/19 PSA World Championships.