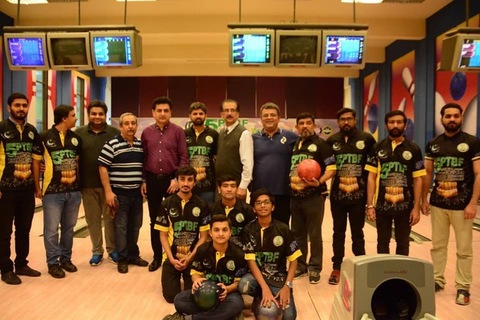 5th PTBF National Ranking Tenpin Bowling Championship-2019      Arena Bowling Alleys Karsaz, Karachi
Shahid Usman won the 5th PTBF National Ranking Tenpin Bowling Championship-2019, amateur category, after staging a stunning comeback in the final game played here at Arena Bowling Club, Karsaz Karachi.
After the completion of first round of matches 16 players were left in the hunt, Arshad Rajput was occupying top spot with total of 1006 pins and was followed by Waseem with 990 pins, Shahjahan with 950 pins, Abbas Raza with 942 pins, Unaib Shafi with 940 pins, Hanif with 926 pins, Naveed with 893 pins, Hadi with 891 pins, Gulzar with 877 pins, Haider with 876 pins, Sh Nasir with 875 pins, Mateen with 870 pins, Moosa with 868 pins, Shahid Usman with 843 pins, Ali Raza with 835 pins and 16th and last place was grabbed by Raveel with total of 812 pins. Afsa, Minhail and Aroosa were 16th, 17th and 18th with 540, 490 and 480 pins respectively. Khawaja Ahmed Muatqeem announced Rs 10,000 each for the ladies as token of appreciation and promised to encourage these females in coming events.

Two games each were played between top 16 and 8 players make exit to pave way for the quarterfinalists. Waseem grabbed top spot with total of 534 pins. He was followed in the second by Hanif with 498 pins, Abbas in third with 471 pins, Moosa in 4th with 470 pins, Arshad in 5th with 465 pins, Hadi in 6th with 461 pins, Shahid Usman in 7th with 452 pins and 8th and last place on offer was grabbed by Naveed with 438 pins.
The massive turnaround by Shahid Usman was completed in the best of three games final round. He showed tremendous fighting skills and showed he got immense potential to become top class bowler in near future. Shahid scored 201 pins in the first game, he scored 145 in the second and 190 in the third game, with total of 536 pins, with an average of 178.87. Hanif bagged runners up position with total of 529 pins while Hadi secured third spot with total of 481 pins.
While sharing his views Shahid said: “I was confident to finish in top three at least and despite being on brink in top 16 and top 8, I never for a while thought about making exit and slowly upped the tempo of my game as I hardly practice regularly and it took a while for me to settle down. I would love to represent Pakistan in international events and win laurels in return, Shahid concluded.”
Pakistan Tenpin Bowling Federation Secretary Ijaz Ur Rehman graced the occasion as the chief guest and highly lauded the arrangements single-handedly made by tournament director Khawaja Ahmed Mustaqeem, who is also the vice president of PTBF and CEO of Virtual Axis and said the way more than 300 kids took part in the inter-school category and 55 bowlers took part in amateur category, was a clear indication that 15 years of his hard work has paid off and now tenpin is spreading to all corners of the country.
Ijaz said signs were highly encouraging and he was quite sure that federation with the active help of people like Khawaja Ahmed and Sindh Tenpin Bowling Association we will soon conduct first-ever international event in Pakistan. “We could have done that in 2015, had Inter Provincial Coordination (IPC) former minister Mian Riaz Hussian Pirzada’s promise of allocating piece of land at Pakistan Sports Board was allocated as per PSB Executive Committee decisions. Around 500 bowlers including present and former national champions will be in action during the 7-day mega championship and next championship will be held in Rawalpindi Leisure Citi Bowling Club.”
The event started at late Wednesday night with 55 bowlers had to play two games each to grab a place for the last 16. The encounter started with great energy as fresh and amateurs reflex their muscles to grab top honours. Five girls also took part in the amateur category, who were given special permission to participate as this time due to non-availability of required number of females, ladies singles category was abolished.