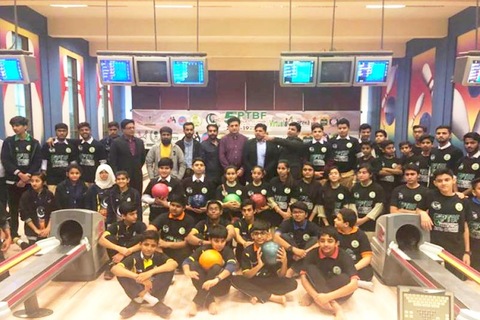 5th PTBF National Ranking Tenpin Bowling Championship-2019      Arena Bowling Alleys Karsaz, Karachi
Abdul Basit of Umber Grammar School won the 5th National PTBF Ranking Tenpin Bowling Championship 2019 inter-school category after scoring 245 pins in two games played here at Arena Bowling Complex Karachi.
In all, 20 schools of Karachi took part in the inter-school category, which was introduced first time in the history of tenpin bowling. Total 300 boys and girls fought their hearts out to win laurels for their respective schools. The matches started at 11am, with 16 lanes and each player had two games to showcase their skills.
After completion of the first game, 10 schools remained in the hunt for the top honors, as organisers had allowed each school to fill five players and had the liberty of giving 10 names. Each team consists of five players and they were allowed to make changes after completion of first round of games. After tough competition, 10 players were left to play the final round.

All the top 10 places were occupied by the boys, who were exhibiting top class bowling skills. It was Abdul Basit , Saifullah, Ibtesham, who were left in the last round. Saifullah had 5 pins lead going to into final strike but he missed the chance to finish it off and had 7 points lead over nearest rival Basit, who smashed 8 pins, which enabled him to take 1-pin lead and also made him undisputed champion of the first-ever inter-school category. Basit scored 245 pins, followed by Saifullah (244 pins) and Ibtesam (223 pins).
PTBF Secretary Ijaz Ur Rehman said: “After watching such a raw talent, I have made up my mind to conduct first-ever Inter-Pakistan schools tenpin bowling championship this year, while in March, we will start a nationwide training camp for school-going kids. Islamabad will host around 100 talented bowlers, who will be recommended by respective associations and these kids will be given free-of-cost training and coaching at Islamabad under world’s best coaches and they will be shortlisted to represent Pakistan in international junior events.”
Sharing his views, chief guest Khawaja Fawad said: “I was not expecting such willingness and hard work put in by these kids. I will provide every possible help to these kids in future and ready to help the federation in whatever capacity I can. My doors are always open for the future of Pakistan.”