The 13th edition of National Women’s Handball Championship came to a successful end with WAPDA claiming the title of the championship at Government Women’s University and University of Agriculture, Faisalabad. 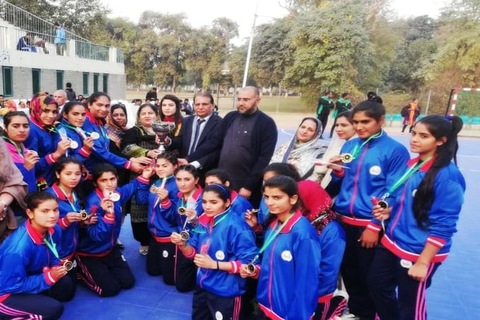 13th National Women’s Handball Championship      Government Women’s University and University of Agriculture, Faisalabad.
WAPDA and Army, both strongest teams in the championship, were battling for the win n the final of the championship in which WAPDA won the match on a close call of 21-20 against the opponent team.
As Army has always been tough in their every sport activity as well, the players did not let the WAPDA players ever dominate the game and were not ready to give up their hopes as well as their efforts to win the final game.
Similarly, WAPDA girls were also seen playing with their full skill in the sport if resulted in their win of the final but the best player throughout the championship was declared Ayesha Dilshad of Army.
While Higher Education Commission (HEC) team crushed Punjab by 38-14 score-line which made them stand on the third spot in the championship.
Chaudhry Muhammad Ramzan and Professor Dr. Sofia Anwar, Vice-Chancellor Government College for Women University Faisalabad, and Brig Zaheer Akhtar, Director Army Sports Directorate, were the honorable chief guests at the concluding ceremony who distributed the medals among the high achievers of the championship.
The 13th edition of National Women’s Handball Championship has been organized by High Education Commission (HEC) under the supervision of Pakistan Handball Federation (PHF) that rolled into action at Government Women’s University and University of Agriculture.
A total of seven (7) teams took part in this championship from which several players belonging from different provinces as well as departments of Pakistan were seen battling it out so as to earn the title in the championship.
Participating teams included: Army, WAPDA, Police, Punjab, Khyber Pakhtunkhwa, Baluchistan, Islamabad and High Education Commission (HEC).