HEC, WAPDA, Army and Punjab thrashed their respective opponents in the first four matches played in 13th National Women’s Handball Championship which is being held at Government Women’s University and University of Agriculture, Faisalabad. 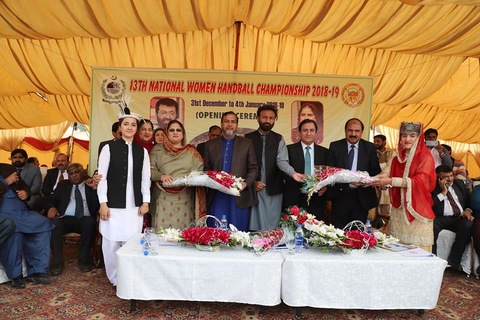 Higher Education Commission (HEC) and Baluchistan teams were up against each other in the first match of the championship in which HEC team made Baluchistan suffer the loss of the first game by thrashing them on a 25-1 score-line. Yet Baluchistan team kept striving on in the game to try to mark more goals but when the final whistle blew it was 25-1 in favor of HEC leaving Baluchistan players tearful at the result.

Whereas in the second game, Army team with its superb game play got successful in defeating Police by a huge margin of 20-2 goals.
Also, WAPDA and Islamabad were battling with their best ball skills to win the match, WAPDA team players were seen running on fast pace from the very start of the game as they kept coming forward recording scores one after the other on the score-board which did not rested until the final decision of the match which ended on 23-0.
Punjab team also marked a convincing win over Khyber Pakhtunkhwa by 11-0 goals.
The 13th edition of National Women’s Handball Championship is being organized by High Education Commission (HEC) under the supervision of Pakistan Handball Federation (PHF) which will roll into action from today and the matches will be played at Government Women’s University while the other matches till 4th January will be contested at University of Agriculture.
Several players belonging from different provinces as well as departments of Pakistan are seen battling it out so as to earn the title as well as the trophy of the championship.
Participating teams include: Army, WAPDA, Police, Punjab, Khyber Pakhtunkhwa, Baluchistan, Islamabad and the hosts High Education Commission (HEC). Army team will be defending their title in this championship.
Professor Tariq Banoori, Chairman HEC and Professor Dr. Sofia Anwar, Vice Chancellor GCWUF were the honorable chief guest who graced the event open and witnessed the first four matches played into the championship.