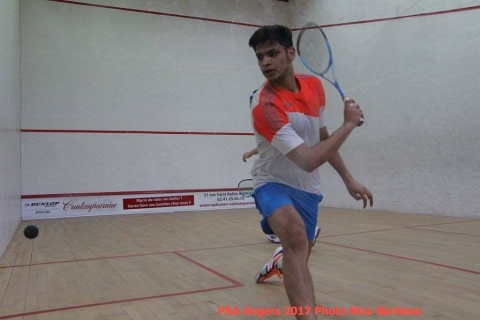 DHA Cup International Squash Championship 2018      DA Creek Club Asif Nawaz Squash Complex,Karachi
DHA Cup International Squash Championship 2018 for men and women continue in full swing at the Defence Authority Creek Club (DACC) where Pakistan’s Asim Khan, Farhan Mehboob and Tayyab Aslam advance into the quarterfinals.
The fifth seed Asim Khan overpowered Sajad Zareian Jahromi of Iran by 3-1 with the final score line of 11-9, 9-11, 5-11, 10-12.
In the highly-charged match, both player fought hard to win the first game but like witnessed in the past that after taking cruise control, Asim let the things slip and allow the opponents too much liberty and complacency to stage a comeback while Young one from Iran took advantage and won the first game by 11-9.
World rank 77 Asim then changed the gear and started playing aggressively which helped the 22-years old Pakistan foremost squash player to win the second game by 11-9.
The third game was identical to the first one, where Asim first dominated and then let the world rank 149 to dictate his terms and then once again showed his authority to win the game by 11-5.
Asim fought hard in a marathon four-game battle while young one from Iran showed some resistance while Lahore born player played superbly to take the commanding position and won the decisive game by 12-10 to book berth into the quarterfinals.
Now Asim khan will face third seed Ivan Yuen from Malaysia at 3:00pm (PST).
In another encounter, seventh seed Farhan Mehboob overpowered his compatriot unseeded Ahsan Ayaz by 3-0 with the final score line of 11-8, 11-9, 8-5[RET] to book berth into the quarterfinal.
Fourth seed Tayyab Aslam thrashed Syed Ali Mujtaba Shah Bokhari from Pakistan by 11-7,11-2,11-7.Today(22nd Nov) Tayyab will face Farhan Mehboob in the quarterfinal clash at 1:30pm (PST).
Top seed Karim Ali Fathi from Egypt, eight seed Addeen Idrakie of Malaysia, unseed Youssef Ibrahim of Egypt and seed Mohamed Reda of Egypt are advanced into the quarterfinal of DHA Cup International Squash Championship 2018.
The tournament marks the return of international squash circuit in Pakistan in general and to Karachi in particular after a long layoff spread over a considerable period of time.
The tournament matches are being supervised by international refrees and is an approved event of Professional Squash Association (PSA) and Women Squash Association (WSA).
The committed and dedicated team work of Pakistan Squash Federation (PSF), Sindh Squash Association (SSA), Pakistan Air Force, Pakistan Navy and DHA Karachi and a host of other organizations has made holding of the grand tournament possible.
The event has been sponsored by Pakistan Beverage Ltd (Pepsi Cola), Soneri Bank Ltd and Byco Petroleum Pakistan Ltd. It is a big international tournament that will revive international squash in the city and in Pakistan.