Pakistan Men's Squash team lost 2-0 to Malaysia in semifinals to settle for a bronze medal at the 18th Asian Games in Indonesia. 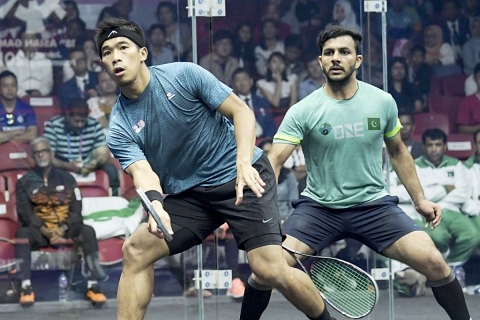 Pakistan's only hopes for a gold or silver medal in Squash event were stalled by Malaysia in the semifinal when they beat the Men's team by 2-0, leaving Pakistan with a face-saving bronze medal. Pakistan shares the bronze medal with India who lost to top seeded Hong Kong in the other semi final in squash team event.

Team Pakistan has held high hopes against Malaysia despite seeded behind #3 seeds Malaysia.

In the first match of the semifinal, Tayyab Aslam was up against Malaysian world ranked #40 Mohd Nafiizwan Adnan. The seedings prevailed in the 35min long match as world # 71 Tayyab lost in straight games without any resistance with a score of 11-8, 11-6, 11-6.

With the weight of staying in the Asian Games 2018 and moving into the final of the Team Event now on the young Israr from Lahore, he faced world #44 Eain Yow Ng. Israr started the match confidently as he won the first game 7-11. The next game saw a change of momentum as the Malaysian won the game 11-8 to level the match at 1-1. Realizing the importance of the crucial 3rd game, both players gave their best for the lead. The 3rd game was decided on extra points as the players fight for 2 clear points at 10-All. The game is finally decided at 16-14 in favor of Malaysia. The match ended in 41 minutes with Eain Yow Ng winning the 4th game 11-6.

The 3rd match scheduled between Amaad Fareed and Malaysia Yuen Chee Wern was not required as the decisive 2-0 score line took Malaysia to the finals with Hong Kong.