Pakistan beat Malaysia in main round of Men's Handball - Group 3 match at the Asian Games 2018, Indonesia. 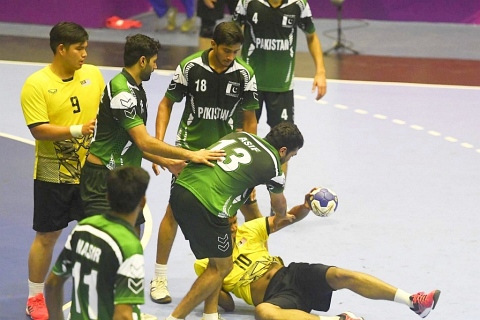 Pakistan started the game with netting the first goal of the match through Hasrat Hussain and kept on leading till the 6th minute when Muhammad Abul Karim scored one for Malaysia. Pakistan left Malaysia 9 goals behind  before the first timeout break with Pakistan in command at 14-5. Pakistan kept on competing intensely and incredibly finished the first period on 21-9.

Pakistan continued to build on their lead in the second period and with some superb game play from Muzamal Hussain and Nasir Hussain who slammed the most goals in the second half help extended the lead to win the match in the end. Pakistani team led by the coach Muhammad Shoaib showed tremendous performance all round and thwarted the efforts of Malaysian players.
Yet Malaysia kept striving to get on in the game but when the final whistle blew it was 47-24 in favor of Pakistan leaving Malaysian players tearful at the result.
This is the second win for Pakistan in the handball event at the 2018 Asian Games. Previously Pakistan defeated Indonesia in their main round – group 3 match by 28-23.