Pakistan lost in a close handball match to the rival team india in their 5th match at the on-going 18th Asian Games in Indonesia. 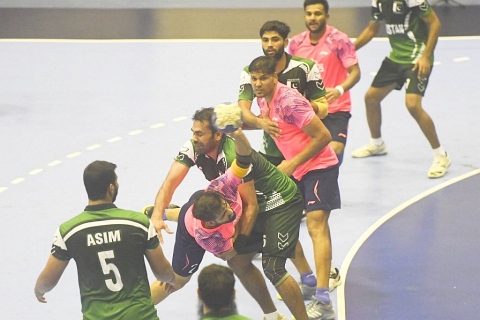 Pakistan played their 5th men’s handball main round match of Group 3 against the rivals india and lost by a close margin of one goal at 27-28. The Pakistan Men’s Handball Team started the match with full esteem as Mazamal Hussain opened the score for his side in the first minute followed by the second goal from Muhammad Zubair from Penalty Line (bottom right) on assist from Asim Saeed in the 4th minute. Pakistan maintained 2 points lead as the india continued the chase at 5-3 in the 10th minute and later at 9-7 in the 20th minute. india then equalized at 10-10 and got the lead for the first time in the match with two consecutive points to make it 10-12. The first half ended with india leading 12-14.

Regrouped and inspired for a victory, Pakistan started the 2nd half at the high note as they leveled the score at 14-14 from two goals down, and again at 16-16 to further snatch the lead at 17-16. Team india managed to equalize the scores at 17, 18 and 19-all with some heroics from Greenidge Dcunha of india, who also remained the top scorer of the match with 9 goals. The game for domination continued as both teams tried to take a lead but found the opponents leveling the scores as the score line moved from 20-all to 24-all in the 50th minute. india managed to get a two points lead at 24-26 and later at 25-27 in the 58th minute. A time out from Pakistan did the trick as Pakistan once again leveled the score one last time at 27-27 in the final minute. with a fast break from Hasrat Hussain. With india in possession of the ball and only 37 seconds remaining on the watch, india took a time out to get their act together. Coming out of the time out, Naveen Punia scored the final goal for india with just 13 seconds remaining in the game. Team Pakistan had a one last chance when Asim Saeed missed a 9meter shot at the goal.

With the loss, Pakistan is positioned at #3 on the Group 3 points table with 1 win and 2 losses after 3 matches. Pakistani Handball Team previously lost to Chinese Taipei and won against Indonesia by 28-23.

Pakistan will next compete against Malaysia on 29th Aug, 2018 at 04:00pm (Pakistan Standard Time).