Pakistan lost the first match of Group 3 against Chinese Taipei with a score-line of 36-32 at the 18th Asian Games in Jakarta, Indonesia. 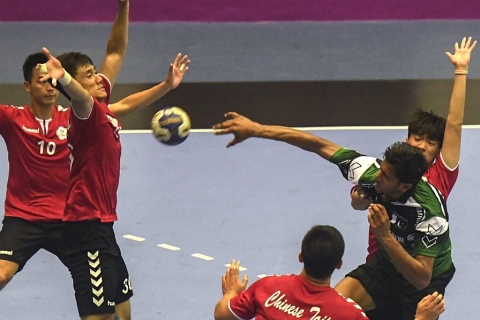 Pakistan lost to Chinese Taipei after a close match in the main round of group 3. Chinese Taipei was seen slamming persistent attacks from the start and led the match with a total of 36 goals against 32 goals from Pakistan.

Shahid Pervaiz scored the first goal for Pakistan in the 5th minute. The scores were leveled at 4-4 in the 9th minute before the Chinese Taipei made the break to take lead at 7-4, which was extended to 10-7. Pakistan made a comeback from the 3 goals deficit to equalize at 13-13. Chinese Taipei  was leading 16-14 at the end of 1st Period.

Pakistan started the second period with high hopes and put in a great effort and closed the goal score to 22-21 in the 42nd minute but the Chinese Taipei proved a better team as the match ended in their favor at 36-32.

M. Shahid Pervaiz scored the most for Pakistan with 8 goals while Goal Keeper Tahir Ali saved 10 of the 43 shots on goal.

Other players who contributed in the total score-line of 32 for Pakistan includes:


Pakistan will be up against Indonesia tomorrow at 09:00AM PST.