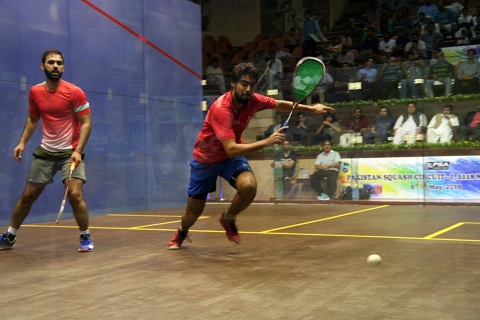 Farhan Mehboob made a strong come back to squash after a short break from the game by winning the Pakistan Squash Circuit-1. Farhan Mehboob who has reached the final by defeating the top seed Farhan Zaman in the semi final faced 5th seed Israr Ahmed.

The first game of the final started at a fast pace with Farhan Mehboob taking an early lead. Israr Ahmed came back from behind to level the scores at 7-7 but could not maintain the level of fitness required to match the skillful game of Farhan Mehboob who then took it to the game point with three straight points and winning it at 11 7.

Signs of fatigue from the previous game were evident for Israr in second game and Farhan Mehboob took advantage of it by hitting some tight drop shots and again taking the lead. A couple of tough umpire decisions against Farhan resulted in a couple unforced errors which help reduce the lead 5-7 but Farhan once again proved too good for Israr to close the game at 11-7.

In the 3rd must win game for Israr Ahmed put up his best effort by reaching to all corners and playing some good shots and took advantage of clumsy approach from Farhan as he managed to win the game at 11-5.

The 4th game clearly started as a battle of the fittest with Farhan Mehboob stepping up the pace of the game and Israr Ahmed's fitness clearly not a match with signs of fatigue clearly visible. Farhan Mehboob took the comfortable lead at 8-2 and finishing off at 11-4 to win the Championship.

The prize money and trophies were distributed among the winners and runner ups by the legendary squash player Qamar Zaman who graced the occasion as Chief Guest.