Zaman to face Mehboob, Amaad up against Israr in semi finals of Pakistan Squash Circuit-1 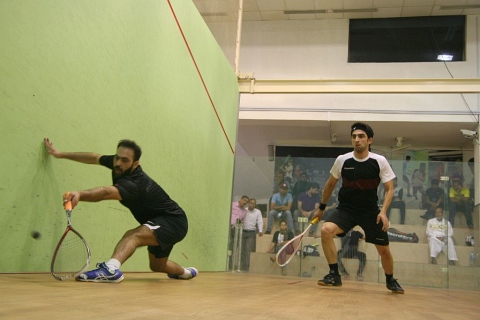 Pakistan Squash Circuit-1      Mushaf Squash Complex Islamabad.
Top seed Farhan Zaman faced hard resistance from the qualifier Zahir Shah in the 5-game thriller. The match started with a surprise from world #299 as he managed to win the opening game by a comfortable margin of 5 points at 6-11 in just 9 minutes. Farhan then came back strongly to shrug off the first game deficit as he won the second game by 11-8. Zahir produced some skillful game to prove his metal as he won the third game by 11-9 in 11 minutes. In the fourth game, a do-or-die for the top seed, Farhan started playing aggressively and comprehensively won the game by 11-4. From there the Twenty-five years old Farhan did not allowed Zahir Shah to play freely and dominated the play as he won the last game and match by 6-11, 11-8, 9-11, 11-4, 11-7 in 42minutes.
Twenty-nine years old star player Farhan Mehboob defeated qualifier Danish Atlas Khan by 3-1 to book his berth in the semifinal. Danish gave tough time to the fourth seeded but could not match the skills of Mehboob as the two fought neck and neck the finish the first game at 11-9, and the second at 14-12 in favor of Mehboob. Danish got better of Mehboob in the 3rd game as won the game at 6-11, only to loose the next with the same score of 11-6. The two produced some outstanding moments during the match which lasted for 39 minutes ans ended with a score line of 11-9, 14-12,6-11,11-6.
In the third quarterfinal, Amaad Fareed trashed third seed Tayyab Aslam by 3-0. Amaad put a shiny start as he won the first game with a margin of 6 points. In the second game Tayyab tried to engage Amaad in rallies but he cut down his efforts and amazed the audience by his agility and aggressive shootings to win the second tough game by 15-13 in 26 minutes struggle. Both the Lahori players fought hard for the third game but Amaad once again kept his calm to win the game by 10-6 and move into the semifinal of Pakistan Squash Circuit-1.
In the last quarterfinal played in the center court of Mushaf Squash Complex, Islamabad, 5th seed Israr Ahmed played marvelously as he outshines second seed Asim khan. Israr faced hard resistance against the second seed as both tried hard to get the place in semifinal but the match ended in Israr’s favor with a score line of 11-8, 11-13, 11-6, 11-7.
Tomorrow top seed Farhan Zaman will face Farhan Mehboob in the first semifinal at 12:00pm while Amaad Fareed to face off Israr Ahmed in the second semifinal at 12:45.