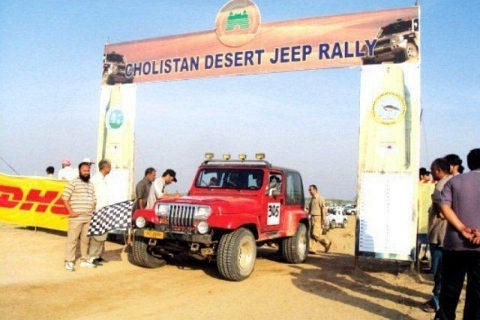 Tourism Development Corporation of Pakistan (TDCP) has announced the dates for 13th edition of Cholistan Desert Jeep Rally 2018. Chairman Task-force Cholistan, Saud Majeed revealed that participants from other countries will also take part while Pakistani women drivers will also be seen in action during the rally.


With its serene views, Cholistan is located in Southern Punjab and is also known as Rohi in local language that means “a land of rolling sand dunes”, which leads to the Thar desert in Sindh. Cholistan desert is around 483 km long and 290 km wide at its longest stretch.

The Cholistan motor rally started in 2005 to promote the beauties of Southern Punjab and to highlight it as a tourist destination and to attract motor sports lovers. It will be a four day event and renowned drivers from all over Pakistan will take part in it.

Rally will be covering three districts including Bhawalpur, Bhawalnagar and Rahim Yar Khan and covers more than 450 kilometers. The route of the rally was planned in such a way to highlight some forts located in the area including Dingarh Fort, Islamgarh Fort, Marrot Fort, Nawakot Fort, Moujgarh Fort, Mirgarh Fort and Jamgarh Fort.


A large number of local and foreign tourists are expected to visit Cholistan during the rally.