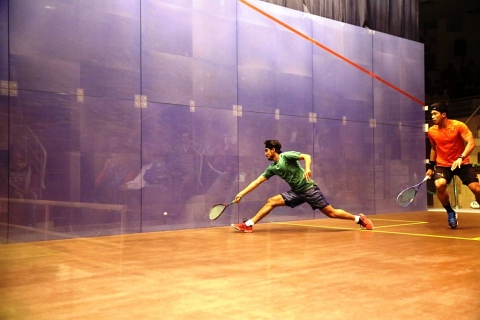 Farhan Zaman, Tayyab Aslam and Ahsan Ahsan Ayaz won their matches against fellow country men on the 1st day of Pakistan Open Men's Squash Championship as all the other Pakistani players failed to make their way in the 2nd round. Farhan Zaman took 32 minutes to defeat Waqar Mehboob in a four set match by 11-5, 8-11, 11-9, 11-5.  Tayyab Aslam dropped a game on his way to victory against fellow Syed Ali Bukhari from Lahore in the highly contested match. The 43min match ended with the score of 11-4, 9-11, 11-5, 11-6. In another match, Ahsan Ayaz also won his match against the local player Muhammad Shoaib Hassan in straight sets by 11-9, 11-4, 11-9.


All the Egyptian players extended their way to the second round with comfortable wins except for Shehab Essam who faced resistance from the qualifier Shahjahan Khan in the longest game of the day which lasted for almost an hour at 58min. Shahjahan looked confident and favorite for the match as he won the 4th game at 2-11 and equalized the match at 2 games each. Shehab Essam then came back strongly in the only 5-game match of the day as he offered no opportunity to the young and fatigued Pakistani to clinch the deciding game with 11-2. The final score of the match was 11-5, 3-11, 11-6, 2-11, 11-2.

All the seeds got through to the next round with no upsets on the first day. Tournament No. 2 and world No. 11 Egyptian Mohamed Abouelghar won against Frenchman Auguste Dussourd in straight games by 11-2, 11-5, 11-2. World #6 and tournament favorite, Marwan El Shorbagy cruised to the 2nd round as he overpowered Chi Him Wong from Hongkong in the last match of the day.

Vice chairman Pakistan squash federation, Secretary Pakistan Squash Federation Group Captain Tahir Sultan and a large number of specters and sports lovers witnessed the matches on the opening day as international Squash returns to Pakistan after a lapse of ten years. Second round of Men event would be played on Wednesday, 20th December, 2017.


Following are the results: