Qualifying round ends with 6 more Pakistanis joining 5 countrymen in the Main Round which will start from December 19. 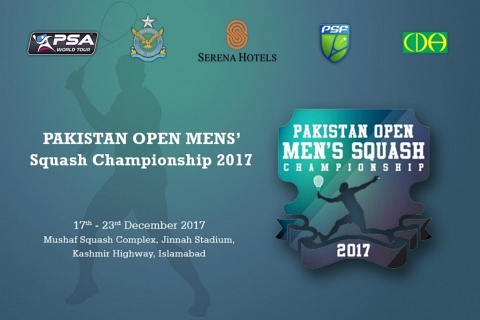 The main draw of Pakistan Open Men’s Squash Championship 2017 concludes as the qualifying round ends with 6 more Pakistanis entering the main round. This makes the combined tally of 11 Pakistani players in the Championship, which is organized by Pakistan Squash Federation in collaboration with Serena Hotels at Mushaf Squash Complex Islamabad from 19 to 23 December.

The $50,000 championship is held after a break of roughly 10 years as 21 foreign players also compete for the prestigious title. World #6, Egyptian Marwan El Shorbagy is the top seed of the tournament. 5 Pakistani players got direct entries to the main round where they will meet players from 8 nationalities, as:

Top seeds of the tournament are:

The organization of the tournament is made possible due to the efforts of Pakistan Squash Federation that has made the necessary arrangements in convincing the Professional Squash Association (PSA) to lift the ban of holding PSA World Tour events in Pakistan due to security concerns. In February of 2017, general security evaluation was carried out by security consultants Sports Risk after whcih it was decided by PSA that it’s safe to sanction tournaments in Pakistan again. It was also decided that any further sanctioning of PSA World Tour events in Pakistan will depend on the execution and the security of this tournament.