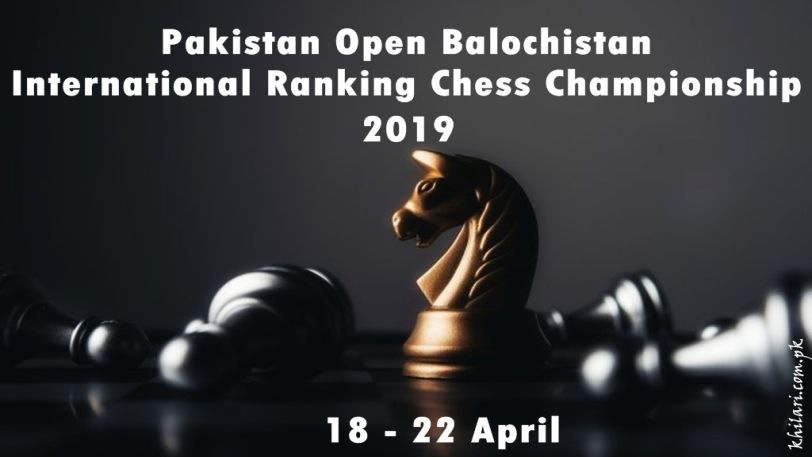 18 April, 2019 - 22 April, 2019
Quetta
Balochistan Sports Board in Quetta
Chess
Chess Federation Pakistan (CFP) in joint efforts of Balochistan Chess Association organized another chess event which was officially named as "Pakistan Open Baluchistan International Ranking Chess Championship" into the current year in which the competitions were held in both male and female categories thus no gender restriction was applied. As well as participants were not restricted to any specific age.
It was a nine round Swiss League Fide Rated Standard event with a time control of 60 minute + 30 seconds. Entry fee for participation in this championship was set as Rs. 1000 which was non-refundable. Fide Event code was 217628.
Fide rated players that came from outside of Baluchistan were entitled to free entry, free accommodation at Pakistan Sports Board Quetta center and two way economy class train fare subject to their registration through relevant provincial association.
This championship was held from 18 to 22 April, 2019 at Balochistan Sports Board in Quetta and the reporting time was 10:00 AM on 19th April. First round started at 11:00 AM sharp. Swiss Manager pairing software was used and all the participants had Fide ID Number.
This championship carried a total prize pursue of Rs. 50,000 and according to the break up, the position holders received the following amounts:
- 1st: 15,000 and Trophy
- 2nd: 10,000 and Shield
- 3rd: 6000 and Shield
- 4th: 5000
- 5th: 3000
- 6th: 2000
- 7th: 2000
- 8th: 2000
- Best Unrated: 3000
- 2nd Best Unrated: 2000