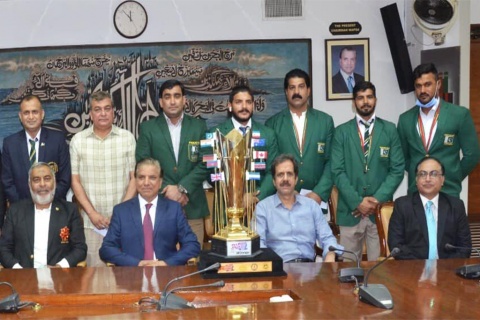 It is pertinent to mention here that seven players and two officials of WAPDA represented Pakistan in 6th World Kabaddi Cup 2020 where Pakistan defeated India in the final by 42-40 points to clinch the title.

Of 42 points of Pakistan team, WAPDA players managed to secure 28 points. Muhammad Shafique Chishti was declared Best Raider who alone secured 13 points, including the last point that helped Pakistan to win the title.

The prize distribution ceremony could not earlier be held due to COVID-19 pandemic. However, WSB was able to hold the ceremony today on improvement of the Covid-19 situation in the country.

Addressing the ceremony, WAPDA Chairman congratulated WAPDA Kabaddi players on their brilliant performance in the World Cup and expressed the hope that they would continue to excel in future as well to bring more laurels to Pakistan. Underlining the significance of sports, the Chairman said that sports alone have the potential to resolve all of our issues by combating terrorism, stabilizing economy and unifying the nation.

It is worth mentioning that WAPDA has been playing a phenomenal role for promotion of sports in Pakistan for the last 60 years.

WAPDA players have not only been showing their class at the national level, but also bringing laurels to Pakistan in international competitions. At present, WAPDA is winner in 35 disciplines (Men-20, Women-15), and runners-up in 18 games (Men-11, Women-7) in National Championships. WAPDA is the biggest employer of sportspersons in Pakistan, as more than 2200 players and sports officials are associated with various units of WSB across the country, WAPDA has 66 teams – 37 men and 29 women – of different games.