17-year-old Aqila Saleem has said that she will soon be representing national team provided in time opportunities to her. 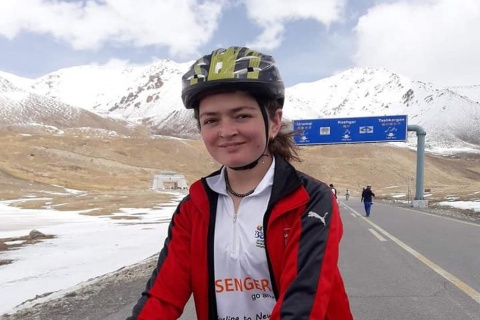 Young, energetic and firm believer on her hidden talent Aqila Saleem has said that she will soon be representing national team provided in time opportunities to her.

Talking to APP in an exclusive interview, 17-year-old Aqila, who got the honor of being the only female cyclist from Gilgit-Baltistan took part side-by-side national and international cyclists in the recently concluded Serena International Tour de Khunjrab Road Cycle Race held in three different stages – first stage from Gilgit to Rakaposi View Point (66-kilometer), second stage from Rakaposi View Point to Sost (110-kilometers) and third stage from Sost to Khunjrab Pass (84-kilometers).

Shockingly the male cyclists completed their first journey of 66km in 2 hours and 11-minutes but Aqila paddled past her most thrilling journey in 5 hours and 18 minutes 23sec. She did not look behind after starting an amateur cyclist and finished the first stage well behind the national and international cyclists part of the race. Aqila has another cyclist Samreen from Islamabad completed the first stage by surprising everyone present on this occasion.

“I’m feeling proud of being the only female from Gilgit-Baltistan participated in the historical road race that started from 400 feet high above sea level and culminated to a record 15500 feet at Khunjrab Pass near Pakistan-China border,” a proud Aqila said. It is the first such road race in the world that reached to 15500 feet above sea level, she remarked.

“I’m a cyclist and riding on a cycle since my childhood. My first demand to my loving father Saleem, a local hotelier, to buy a cycle and since then I explored many places on my two-wheelar,” she said, adding, “my first love is cycling and I want to be an international cyclist by representing Pakistan.”

Aqila Saleem, hailing from a remote village Passu, District Hunza, Gilgit-Baltistan, used to go on her bi-cycle to her education institution Government Girls College Gulmit, Gojal. “It is really fascinated me when other girls, from my village Passu, coming on foot and I used to go on my bicycle which clearly indicated my love toward cycling,” Aqila Saleem added.

Aqila also took part in the second stage of 110km but she could not make it to the finish and after cycling for 57km, she starting walk alongside her ordinary cycle.

“My aim was to complete in the second stage, but I was badly feeling pain in my legs and afraid of developing cramps in my muscles that is why I could not reach to the finish line but I assure you next time I will complete all three stages,” she added.

About her third stage, Aqila said that I have an ordinary cycle but I tried my hard to do cycling in the last stage to be finishing on Khunjrab Pass but it was so tough as the cyclists started the road race from 400m feet above sea leave and finished at high altitude 15500 feet which is rather a difficult task for me to reach at Khunjrab Pass.

“I’m so much eager to be part of the national and international cyclists but I don’t have proper cycle, the cyclists used during the race. There is more than 57 slops and above 66 uphill task during the last stage of 84kilometer from Sost to Khunjrab Pass so it is rather not a good decision for me to cycle on such a danger track. Look it my cycle its breaks are inappropriate, without gear and a good chain,” Aqila giving a laughing response added.

The national and international cyclists use different type of bicycle, with new technology, different in sized according to body structure, front and back wheels breaks, the addition of chains and cranks and pedals, gear for downhill and uphill and above all good control, so it is difficult for me to compete side-by-side as an amateur cyclist, Aqila remarked.

“It really doesn’t matter much where this one individual young lady is going on her wheel and completed the first stage but no one come to me and appreciate or invited on stage to tell the people that Aqila completed the race as an amateur cyclist and she becomes the only female from Gilgit-Baltistan to achieve that credential,” she said with tears rolled down her cheeks.

Riders like me want to believe we are doing our part for the environment but the cause the national and international cyclists brought her for us to highlight the new venue to rest of the world besides attracting local and international tourists,” Aqila said.

“Our livelihood are more on tourism so holding of the Serena International Tour de Khunjrab Road Cycle Race is a good initiative in motivating people to adopt cycling for good health, free from pollutions, explore new venues and attract local and international tourists to visit this scenic places,” she further added. “I have been promised by Secretary PCF to be invited to the national camp very soon and from now onward I started preparation so that I could show my talent in an appropriate manner,” Aqila said.

“My mom and my father were my loving partners who always extended support to me in my cycling,” Aqila replied to question, adding, “I also use to gardening and being vegetarians I have a lawn full of various types of seasonal vegetables.”