Pakistan to face India in three-match kabaddi series in November

The Pakistan Kabaddi Federation (PKF) has decided to hold a three-match kabaddi series against India in November this year at the Kartarpur Corridor. 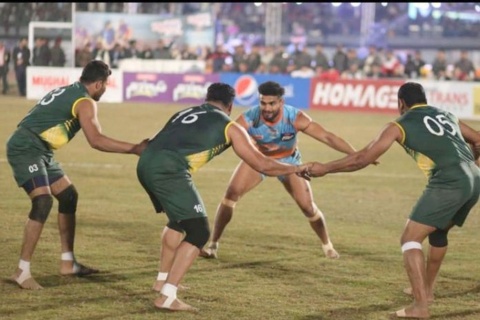 The PKF Secretary General Rana Sarwar has announced that the Pakistan Kabaddi Team will face Indian Kabaddi team in a three-match kabaddi series at the Kartarpur Corridor in November.

In 2020, Pakistan laid hands on the World Cup as defending champions India — six time winner — could not continue their so far unbeatable spree in the gripping final of the World Cup Kabaddi (circle style) at the Punjab Stadium Lahore.

The Indian kabaddi team was last in action at the South Asian Games in 2019 in Nepal. India won the gold medal after beating Sri Lanka in the final.

"Pakistan have the finest players in the field of kabaddi and our old and experienced players should have to train new talent for our nation to build a strong team and strong cooperative humor in our kabaddi grounds." Baber Gujjar said.