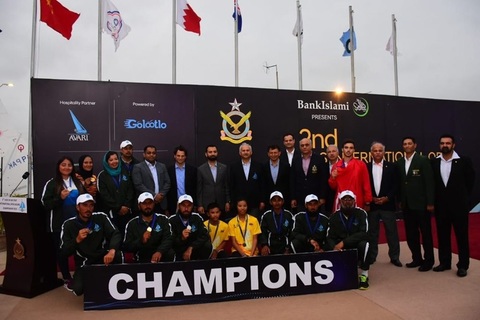 2nd CAS International Open Sailing Championship 2019      PAF yacht Club Korangi Creek, Karachi
Pakistani sailors showed excellence performance as they won 2 Gold, 3 silver and 3 Bronze in the 2nd Chief of Air Staff (CAS) International Open Sailing Championship which concluded successfully here at the Arabian Sea, Karachi.
Showing great determination Pakistan’s seasoned sailor Mohammad Tanveer who was a member of Pakistan’s squad for the 2002 Busan Asian Games and Qasim Abbas were crowned champions in Laser Standard and RS:X, respectively.
Pakistani sailors did not live up to the billing in the Laser Radial (women) and the optimist classes as the gold medals in these classes went to foreigners. In the optimist class (mixed gender, under-15) Thailand’s Panna Boonnak finished at the summit with ten penalty points. He remained steady and never looked back despite some tough days during the event.
Chief of Air Staff (CAS) Air Chief Marshal Mujahid Anwar Khan gave away medals to the leading competitors. The other countries who fielded sailors in the event were Indonesia, Sri Lanka, Egypt, Turkey, Australia, Chinese Taipei, Hong Kong and China. The PAF Yacht Club organised the competitions in collaboration with the Pakistan Sailing Federation (PSAF).
Following are the final results of CAS International Open Sailing Championship:
On the fourth and final day, Tanveer claimed the Laser Standard title by finishing with 16 points in the 12 races series held over four days. Tanveer, faced some tough time in the fluctuating conditions on the Arabian Sea at Korangi Creek before crafting a super finish. He kept the pole position in the 17-man fleet for all four days in the series in which two discards were allowed.

He was followed by Navy’s Muzammil Hussain who wrapped-up his impressive journey with the silver medal. The 30-year-old from Kohat, who made his debut in an international event in Bahrain a couple of months ago, showed enormous resolve and consistency but in the end had to be content with the runner-up position. He sailed superbly in the last six races but the initial lead taken by Tanveer kept him away from what could have been his first title.

“I am happy with the way I competed in this event,” Muzammil said’. “I beat Malaysia’s and Bahrain’s sailors, who had beaten me in Bahrain a couple of months ago in my debut event in Bahrain,” he added.

Pakistan’s Najeebullah claimed the third position with 31 points. The RS:X crown went to steady Qasim who did a marvellous job to finish at the summit with 14 penalty points. Qasim maintained solid lead throughout. He was followed by Mohammad Sajjad of Pakistan with 15 points. Mami Safouan of Tunisia claimed bronze with 32 points.