Pakistan’s Mohammad Tanveer and Qasim Abbas were still leading in their respective classes on the second day of the 2nd Chief of Air Staff (CAS) International Open Sailing Championship 2019 here at the Arabian Sea in Korangi Creek, Karachi. 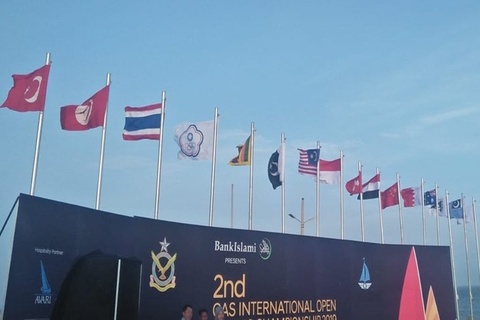 “Really it was a tough day. My second race was not good as the boat capsized twice but as one discard was allowed I still kept my lead intact,” Tanveer, who leads the Laser Standard class, featuring 17 participants.

“You know conditions keep changing in such races but tomorrow I expect better conditions as races will begin at 3pm,” said highly experienced Tanveer from Pakistan Air Force (PAF), who represented Pakistan in the 2002 Busan Asian Games.

On completion of six races, Tanveer was leading Laser Standard with seven points. He was followed by Pakistan’s Muzammil Hussain with 12 points. Muzammil, who had finished third on the opening day, displaced Malaysia’s Asri Asman from the second spot. Asri has 13 points.

“Conditions were tough today but I sailed very well and I am confident to rise to the top if I sailed well tomorrow,” the 30-year-old Navy sailor Muzammil said.

Muzammil has only two years experience and the Kohat’s boy eyes a title in order to capture the attention of the national selectors.

“I have little experience and no coach. But I am working hard,” Muzammil said.

Meanwhile, international Qasim Abbas kept his lead in the RS:X in six races. Qasim led the pack with six points on Thursday in which one discard was allowed. He was followed by Mohammad Sajjad of Pakistan with eight points and Tunisia’s Mami Safouan with 16 points.

Thailand’s Master Panna Boonnak led the optimist class with six points.Thailand’s Miss Thorfun Boonnak (11 points), who had finished third, did a good job by displacing Malaysia’s Ummu Nurdania Rozaini from the second spot as the later went down to the fourth place with 17 points.
Pakistan’s Abdullah Akram, who had ended fourth on Wednesday, rose to the third with 15 points.
In Laser Radial (women) category, an absorbing battle was seen with Malaysia’s Khairunneeta Mohd Afendy maintaining her lead at the summit after six races with five points.
Pakistan’s Hana Fatima Asad was lucky to rise to the second spot from the fourth she finished at on the first day despite having failed to finish two races on the difficult day with 22 points.

Egypt's Marium Ihab Mohamed, who had finished second on the first day, ended third as she failed to finish the first two races and skipped the sixth.

She has 25 points.
Races will conclude on Saturday (tomorrow), which will be followed by prize distribution ceremony. The PAF Yacht Club is organising the competition with the collaboration of the Pakistan Sailing Federation (PSAF).